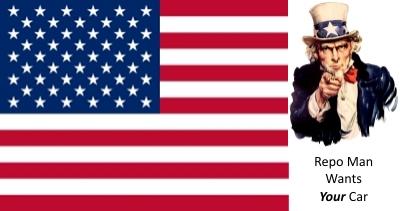 
(1) Want to get back on your feet? Miss a couple car payments!

(2) How to stop the repo man? Pay your car payment!

(3) What should you do if a repo man comes to repossess your car? Let him! You can always call the bank later.

(4) Your health is worth more than a car: stay safe.

(5) Are you having financial problems? Call your bank today, right now, and discuss the problems. Most banks are more than happy to work with their customers, but it is your responsibility to tell your bank that the problems exist.


In the past I had worked at a Buy-Here-Pay-Here car dealership. The majority of individuals that buy at Buy-Here-Pay-Here dealerships have bad credit caused by a history of their not paying their bills. I am not talking about people who missed one or two home and car payments, I am talking about people who knowingly and purposefully run up medical bills, telephone bills, utility bills, credit cards, apartment rents, and car loans with the people never having had an intention of paying. A sizable percentage of people who buy at Buy-Here-Pay-Here car lots simply cannot finance a vehicle anywhere else.

The typical customer is always late on their car payments, and the national average of customers that have their vehicles repossessed is reportedly around twenty to twenty-five percent. The typical dealer's cost to repossess a vehicle can run anywhere from around $200.00 to $400.00. If the vehicle is out of town, the costs can be much higher due to the repossession company charging mileage. Due to a large percentage of repossessed vehicles not being cared for by the buyers, there is also a frequent cost to the dealer to repair the vehicles before the cars can be resold. All in all, it generally costs a Buy-Here-Pay-Here dealer around $1,000.00 extra for every car repossessed, and that cost must be passed on to the next buyer.

While sitting at my desk one morning, I was not pleased that two customers had purchased SUVs about two months previously but had not made a payment since the down-payment. The vehicle repossession service that we normally used had allegedly been actively looking for the customers, and if the repo man wasn't having any luck, then it was likely that the customers were purposefully hiding the vehicles.

With a gut-feeling that my luck might be better than the repo man's, I grabbed the spare keys to the vehicles and used my lunch hour to drive by the customers' addresses. Both customers worked at medical centers on the same street. Not seeing either vehicle at the centers, I drove to the nearest customer's residential address which was an apartment complex where I had once lived before. I drove through the parking lots, including those that are half hidden in the rear of the complex, and I spotted the SUV sitting near the street at the far end of the parking lot.

The excitement of repoing a vehicle is difficult to describe. There is the emotion of concern to ensure that the vehicle you are about to repossess is the right one and not someone else's, plus another concern that the owner might run out of their door with a gun. There are also thoughts of wondering how to respond if the police should happen to show up and ask questions. For myself, I didn't so much as want to speak to the owner; all I wanted was to grab the SUV and run.

While driving past the vehicle I saw that the SUV still had the dealer's temporary paper license tag that had expired a month previously. Reasonably certain that it was the right vehicle, I parked my car around the corner about two-hundred yards off and began walking back towards the SUV. I carried with me a non-expiring paper dealer tag and a cordless screwdriver. Approaching the SUV, I looked through the windshield to verify that the VIN number matched the dealer's records. Inserting the key in the door lock, the key unlocked the door which further helped to settle in my mind that I was getting into the right vehicle.

Jumping into the driver's seat, I inserted the key into the ignition, the key turned and started the engine, which again reassured me that I was getting the right vehicle, and I quickly but smoothly backed the SUV out of its parking space and drove it to the other end of the complex. Stopping near the far exit, I shut off the ignition so as to prevent any possible attempt from a pursuing owner to hop inside and drive off, and I walked to the back of the SUV where I removed the expired paper plate and installed a dealer tag in its place.

With the dealer tag installed there would be little chance of the police stopping me (the expired buyer's tag was an invitation for a ticket and more trouble than I wanted to try to explain to a policeman who might think I stole the vehicle). Exiting the parking lot the SUV's tires chirped a little, just enough that I mused to myself that I might have decided to burn-rubber if the buyer had been in pursuit.

Within seconds the anxieties had mostly evaporated and in their place was the emotional rush and satisfaction called "justice". It's a very satisfying feeling to know that your actions are right and that they help to correct what someone else had done wrong. I had heard repo men talk about how much they enjoy repoing cars, and now I know from personal experience what they meant.

After driving the SUV to the dealer's lot and calling the police department to report the repossession, I spoke with the buyer on the phone and she said she had not known that the SUV had been taken. I had her drive to the dealer's lot where she could collect her personal possessions and sign a release. As in weeks previously, she promised to bring in a payment the next day, but of course she never made the payment.

My first vehicle repossession was perhaps the easiest kind: it was parked in a public area, it was early afternoon, I had the ignition key, and the owner was not the type to be violent. I have filled paperwork for hundreds of repos from banks, car lots, and other lenders, and I have heard many stories of how some owners have behaved violently towards the repo men. The vehicle repossession business is not an easy one, nor is it glamorous like what some television shows portray. Some owners make physical and legal threats, many owners are loudly vulgar towards the repo man, and some owners go to great lengths believing that their cars are so well hidden that they cannot be found.

There are three rules of thumb that are to your benefit if you are behind on your payments and your car is being repossessed.

(1) Be polite. Your vehicle is going to be repossessed regardless of whether you are courteous or obnoxious, so you might as well be polite with the repo man and hope that his report to your lender may help you to either get the car back or at least stop the lender from reporting your repossession as involuntary. Your aggressiveness and vulgarity will very likely be reported to the lender, and the lender will likely make notes of your behavior which will influence not only the lender's decision whether to ever loan you money again, it may also affect your future credit with other lenders. You already have a problem with the vehicle being repossessed; don't make more problems for yourself!

(2) Surrender your keys to the repo man. The lender must have new keys made if the lender does not have spares, and new keys can be expensive to make. If you get your car back, the cost of the keys will be included in the added expenses, and if you don't get the car back at least the lender will have a better opinion of you and your future loans.

(3) Remember that it's your fault, no one else's, and definitely not the repo man's. You made the mistake of buying the car with credit, and it was your mistake for not having the resources to pay off the vehicle. Accept responsibility, let the car go, learn, and then get back to your life.

Repo Laws A short list of laws for repossession companies and for vehicle owners.

Repo Questions and Answers Answers to questions asked about laws and repossessions.

First Repo An article about an individual repossessing their first vehicle.

How to Become a Repo Man Some good basic information about the repossession business and how to become — or avoid becoming — a repo man.


Disclaimer: The information provided on this website is opinion only and is not intended to be legal advice. Consult a legally licensed attorney for legal advice.