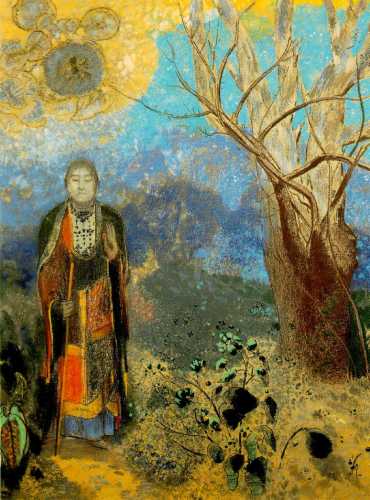 
"To see things in the seed, that is genius." — attributed to Lao-tzu

But the man who is enlightened within the manner of Buddhism's path, if his enlightenment were full, then he should be aware of his inward self, and he should be within a recognition of the many components that are continually in the flux of creating new states of being, and he should be with the understanding of the nature of Creation, that of all things being composed of three or more components. No man is a master of his enlightenment if he cannot remember on which side of his umbrella did he leave his shoes, and though a man might attain a constant consciousness, still, if the consciousness is not observing and being aware of the man's own self, then the enlightenment is not an enlightenment, but rather merely a means of conscious sleep.

Within the quietude of awareness, an awareness directed back upon one's self, is the observation of a universe unfolding, of a creativity in progress, and though a created thing cannot measure that which created it, still, the Mind can observe the golden ratios of events combining to create new golden ratios of events, and the Mind becomes capable of dividing analog events, achieving a cognition of symmetries within fractals, of witnessing events that man's science has not yet thought to exist.

The enlightened Buddhist should immediately be capable of describing in great detail what this thing called ethics is. If a man believes himself sufficiently enlightened to grasp the sound of one hand clapping, then is his belief true if he cannot grasp the origin of his own ethic?

The dual becomes singular, and the singular becomes dual: the awareness observes.

Update August 23, 2020: The original article was written about eleven years ago. Aside from adding "attributed to", the article's wording has not been changed.

For clarification, the "Buddhist form of enlightenment" statement was written while with thoughts of being within the state of what has been popularized of Buddhism's and Taoism's "enlightenment"; that of having eliminated one's outwardly expressed emotions. When the article was first written, it was not intended to imply that the Buddhist/Taoist forms of 'enlightenment' are an ultimate achievement, nor so much as worthy. The words' aim had been to merely point at the reality that some people claim to be enlightened with a full awareness of everything within themselves, and yet they cannot describe anything, especially not what an ethic is.

The article Type A and B Intelligence gives more information about the topic, including a brief mention: "...as easy as it is to turn-off ticklishness, thinking four specific words almost instantly results in some individuals becoming centered without the gross outwardly flowing emotions influencing awareness and reasoning".

'Happy anger, sorrow joy, it have-not expressed, call it center. Express and always center temperate, call it peace.' (draft translation of a portion of Zhong Yong #1). The only known writing of the topic to have ever been rational, was the quote accredited to Confucius.