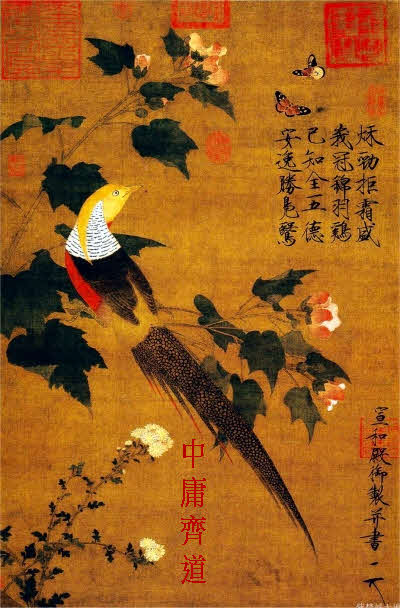 The ancient Chinese texts are useful as a means of presenting good ideas within a meaningful structure of concepts. The following are translations of a portion of the first sentence of 中庸 (Zhong Yong), and the translations themselves are arranged to be most logical relative to what is real in Nature, as well as to ensure that the sentence retains harmony throughout the book: chi dao.

Therefore, 中庸齊道 (Zhong Yong Chi Dao - Center Express Harmony Way), is an independent translation and interpretation, which merely makes use of ancient Chinese texts, while not claiming to be the original texts themselves.

Definitions of the Title

齊 = qi = alike, even, neat, similar, to make even, uniform; adverb = simultaneously, together. In English, 齊 is usually spelled as chi, and often pronounced as 'chee', and sometimes pronounced as key or kee (ki) depending on different languages, different cultures, and whether the word is used as a personal name. The Chi Dao use of 齊 is intended to imply all of the synonyms simultaneously, that of a way of thinking and of a way of acting that are correct relative to the unchangeable standard of Nature's way. Nature's way is creativity; Nature creates, and, so, a man chooses correctly when he also creates. Creativity requires harmony, and, so, a man chooses correctly when he is also of harmony (⦿ centered) with himself and with Nature's way.

The title's first two words — 中庸 (Zhong Yong) — are not possible to be accurately translated into English, because, the original author did not offer an explanation of what the words were intended to convey, and so, today, the words cannot be known because the words were not explained. The best approach is to first read the original book to discover what was said, and to then use the book's message to become the definition of the title's words.

There currently exists over a dozen different translations that use different English words for the original 中庸 (Zhong Yong) title. Examples include "Centrality and Commonality", "Mean-in-Action", "The Central Harmony", "The Unwobbling Pivot", "The Central Ordinary-practice", "Bring Centered in Ordinary Practice", "Middle Constancy", and "Mean".

The most popular title in English is Doctrine of the Mean, which does not relate to the original words. Doctrine implies 'canon, rule, guideline, dogma', a teaching that is to be obeyed, but the book itself is not dogma, nor of rules, nor a guideline. The book is merely as a pointing of the finger at different things, while not saying things like 'do this, do that'. Also, the book frequently points at inner centeredness ⦿, which is not an external measurement, and which is not a mathematical 'mean'. 'Doctrine of the Mean' is a translation that is presented within an interpretation that is unknowledgeable of what centeredness is, an interpretation that all things can be mathematically measured, and an interpretation that all expressions of concepts are doctrine.

As a whole, unless an individual is internally centered ⦿, then the individual cannot be the favored Confucian idea of what a quality man is. However, as a whole, Confucianism is also aimed for the masses who cannot achieve ⦿ centeredness: the Confucian approach is to aim for a compromise, of the people learning external behaviors that a common person can perform without themselves being of inner quality.

For use within the Chi Dao translations, 中庸齊道 (Zhong Yong Chi Dao) implies Center Express Harmony Way). The idea is that the center ⦿ is not 'used', but rather how the ⦿ is expressed. Within 中庸 (Zhong Yong) there is no mention of how a ⦿ could be used, only how ⦿ is expressed, and, so, therefore, the Chi Dao preference is to use express.

All religions have different interpretations of what a 天 heaven might be, and so, whatever interpretation of heaven that pre-China cultures might have held, the interpretation cannot be the same as today's, nor known. Nevertheless, it is likely most plausible that the general pre-China era interpreted 'heaven' to be of gods, angels, warring factions, and most all of the similar things that are still believed today in all religions.

The concept of 'heaven' being presented in Zhong Yong is that of heaven being the 'Creator' who created Creation. Amongst the concept's first difficulties is that the three dimensions of Creation (height, width, depth) had to come into existence from a 'Source' that is not and cannot be measured as having height, width, and depth. The popular modern belief is that a 'big bang' created Creation, but the belief in a 'big bang' also requires a belief in the 'big bang' possessing 'energy', but, energy is a three-dimensional thing that requires three dimensions to exist, which means that the 'big bang energy' idea is as invalid as a three-dimensional Creator.

Outside of — and permeating — Creation is a 'thing' that is given the Chinese name of wuji, which implies an 'immeasurable void'. Wuji has no dimensions, and thus, cannot be measured. The human mind cannot grasp wuji, because there is nothing in wuji to sense nor to measure, although, however, wuji can be reasoned to exist because of how common perceptions and dimensions behave.

A modern idea of wuji is that of what is called 'quantum entanglement', which, allegedly, enables particles separated at long distances to react simultaneously if one of the particles is altered. The ability for distant particles to react with the other is a behavior that does not agree with general physics, nor has the 'string between the particles' been perceivable and measured. Since 1996, independent research has produced verifiable observations of the effects of wuji, but also yielded a firm "I don't know" of how the wuji effects might 'function'.

The point here is that the 'heavens' that created Creation cannot be known by a human, nor by any other organic being in the universe. Since it is common for people to think of 'heavens' as being a three-dimensional place of where three-dimensional gods and angels dwell, then 'heaven' cannot be the Source of Creation.

Therefore, Chi Dao uses the word Source because the word points at what is plausible of being a precursor of Creation.

命 (ming) is likely best translated as 'fate' because it is very common in Asia for people to think of the heavens as fating mankind. Some sects of Christianity also believe in predestination. A parallel idea exists within a modern view of physics, that the known laws of Nature are fixed, and regardless of what happens, the physics-based laws of Nature had already predestined the outcome.

Within the normal point of view, if a thing can be fated, then the fate was already chosen (predestined) prior to the creation of Creation. Another point of view is that the soul or "I" chooses the body's fate, and the soul then journeys with the body. Yet another point of view is that the future can sometimes have an influence upon the past, and regardless of whether an individual prefers to give it the name of 'quantum entanglement' or a feature of wuji, still, the effects of futures have been observed and measured to occur in the present, which raises the observation that no person really knows what is fated, nor how a thing might be fated, nor if perhaps the future Creation created Creation itself.

The sensible concept, therefore, is that the Source 'nascented' Creation. Somehow Creation was created, and the 'Source' can be anything from gods to wuji futures. The Chi Dao, therefore, permits the 'Source' — not three-dimensional heavens — as being a cause of Creation, and 'nascent' being of a parallel act as is the act of 'fating', but 'nascent' also permits latitude of the 'how and why' Creation was created.

之 (zhi), as used in the sentence, likely infers 'it': the Source and/or the way of creating Creation. Chi Dao chooses both: the act and way of the Source, because, the act and way are the same things except viewed and interpreted from different points of view.

謂 (wei), as used in the sentence, best infers the English word 'call'. The word 'called' might be of common English casual language, but the word 'called' implies that the unknown thing has already been given an unchangeable name, which if the name is accepted, then the listener has lost his chance to first reason the thing being spoken of. Saying "it is called" is an act of removing the listener from the conversation, but saying "call" is an act of permitting the listener to remain thinking while permitting the speaker to momentarily offer a word to be used for sharing different interpretations. The difference between 'call' and 'called' might appear to be tiny, but the influences of each word are huge.

謂 (wei) could also be applied as inferring 'the', which would be an acceptable translation, but using 'the' would be similar as using 'called', and have similar effects also.

性 (xing) is an uncomfortable term. The more plausible intention of the original word was to infer 'inner nature', but the idea of speaking of the unknowable Source's inner nature is not rational. Nevertheless, the sentence's concept is pointing at 'source nascents, it call inner-nature-behavior-quality-of-nascenting'. 'Nascent-ness' is generally also saying 'inner nature', but 'nascent-ness' is more descriptive while not pretending to know the mind of the Source. Therefore, Chi Dao chooses to use the term 'nascent-ness' because the 'nascent-ness' would be whatsoever the Source had chosen to express when creating Creation, and too, the 'nascent-ness' permits the sentence and the book's following sentences to be of harmony: chi dao.

A plausible and useable alternate phrasing is 'Source nascents, it call Nature'. The Source created Nature, and so, from the point of view that uses Nature as the unchangeable standard, the idea of 'Nature' is valid and can be accurately extrapolated to also arrive at 'nascent-ness'. Chi Dao chooses 'nascent-ness' because 'Nature' too easily focuses on the created thing, and not on the thing that created.

Whenever possible and useful, Chi Dao chooses words of verbs rather than nouns, so that the verbs can help communicate the actions that are real, and what nouns are given to. Also, by using verbs, the listener is permitted to think and to reason the process of the actions of verbs, permitting the listener to create in their own mind their own interpretations and understandings of Nature.

The first sentence is very important because it is the first in a string of logical sequences that lead to the concept of a quality man's beauty of dao.