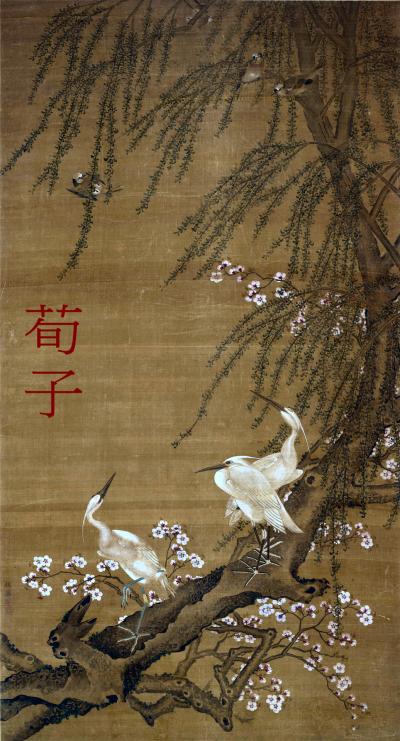 
The third sentence of paragraph #9 in Encourage Learning contains two of the most important words within all ancient Chinese texts: 德 de, which is often translated to imply 'virtue', and 心 xin which is often translated to imply 'heart' or 'mind'. A misinterpretation of either word can easily lead to a misinterpretation of a whole book.


"By gathering earth and making a hill, the wind and rain originate; by gathering water and making a pool, the crocodile and dragon are brought forth; by gathering goodness and making virtue, wisdom equal with that of the gods is ordained, and the heart of the sage is perfected. For unless a person adds steps and half-steps to each other, he cannot go a thousand li; unless little streams are gathered, rivers and seas cannot be formed." [Footnote added by author that references the word "other": "We should say, goes a step at a time."] (The Works of Hsüntze by Homer H. Dubs, Ph.D., publisher Arthur Probsthain, London, 1928)

"If you accumulate enough earth to build up a high hill, rain and wind will flourish because of it. If you accumulate enough water to fill a chasm, dragons and scaly dragons will be born within it. If you accumulate enough good to make whole your inner power, a divine clarity of intelligence will be naturally acquired and a sagelike [sic] mind will be fully realized. Accordingly, if you do not accumulate paces and double paces, you will lack the means to reach 1,000 li, and if you do not accumulate small streams, you will have no way to fill a river or sea." [Footnote added by the author: "The divine clarity of intelligence is characteristic of those whose vivid and sharp awareness enables them to discern the minute and subtle distinctions that others habitually miss. Such men naturally behave in a way that produces good fortune not only for themselves, but for others as well. Wang Niansun understands this quite differently: "If you accumulate enough good to complete your inner power, the spirits will naturally be obtained and the sagelike [sic] mind will be perfected."] (Xunzi - A Translation and Study of the Complete Works, Dr. John Knoblock, ©1988, Stanford University Press)


The following is the original text along with added English commas. The wording illustrates the sentences' bone structure.


The following is a word-per-word draft translation of the five sentences, with each of the sentences helping to explain the others. Note that sentence four has omitted an English term for 蹞 (kui). Kui is not found within known references and dictionaries, and so the actual translation of kui will not be given here. 步, 致, and 流 are given common dictionary terms, but the words themselves infer something different that what the dictionary words suggest.

[(i) A suitable synonym might be 'begin', but 'begin' might be misinterpreted to infer that mountains are the sole source of all winds and rains. Confidence is high that the ancient Chinese knew that winds and rains can and do form on flat oceans. Also, the original word itself better fits 'build'.]

[(ii) Jiao Long, two written words, spoken as one noun, is the name given to the Chinese aquatic dragon. The sentence is not inferring that Jiaolong is literally physically real, nor that a physical Jiaolong literally lives there. The sentence is colorful, of creating an allegory that relates to and better clarifies the intentions within the previous and following sentences. If the wording were of Japanese sentences, then Jiaolong might be interpreted to infer a 'water spirit'. Sometimes the modern Japanese meanings more closely follow ancient Chinese meanings than what are suggested in some modern Chinese definitions. Considering the structure of the current sentences, then the idea of Jiaolong being a water spirit (e.g. 'spirit of pool') might indeed have been written with the alluding to 'spirit of water' instead of a physical mythical dragon.]

[(iii) The original word points to an idea similar to a budding plant, one that has begun to grow above the soil. Taken from an observer's point of view, the word suggests a thing that has already been born (i.e. from seed) but is not yet mature. How the original word is used within a sentence, helps define how the word is to be interpreted.]

[(iv) Li can infer 'inner' (like 'inner benevolence') or can infer a measure of length. The sentences may indeed appear to be speaking of walking a thousand li (about 621 miles), but, without first knowing what 蹞 implies, then there can be no confidence of how li ought to be interpreted. Also, the translations of 步 and 致 themselves further change the whole of the sentence's meaning. The philosophical translations simply glossed-over 蹞 without attempting a translation.]

[(v) The interpretation of 'flow' changes what the other words and the previous sentence point to.]

[(vi) The interpretation of 'sea-ocean' changes relative to the previous sentences' use of how 蹞 is interpreted.]


The original Chinese word given as "good" in the philosophical translations does not infer 'good', but 'good' is often used because the English word is popularly used within Chinese-English dictionaries, as well as being popularly used by previous translators. For the moment, 'virtuous' is the preferred choice.

A better choice for 'deep-pool' would be a word that infers accumulated water in motion, perhaps roughly like a whirlpool, but different. The idea of "abyss" relates to very quiet waters, not relate to waters that move. For the moment, 'deep-pool' is sufficient.

The only pause of curiousness within the first three sentences is the Jiaolong name. Roughly, the first sentence speaks of mountains that enable rain (water), the second sentence speaks of water (rain relates to water) that enables the forming of a pool of water (which relates to rain forming pools), enabling Jiaolong (water spirit) to live in the pool of water, and the third sentence similarly speaks of accumulations (i.e. pools) of virtuous behavior, which enables the obtaining of a spirit (analogous Jiaolong) of bright-understanding.

Xunzi is reported to have lived in several of the different pre-China nations, and so it might appear to be reasonable that the three sentences ought to be interpreted to imply what some modern Chinese may think of as the aquatic dragon. However, there is no guarantee that Xunzi's choice of words must only relate to modern Chinese meanings. Also, it is not uncommon for ancient Chinese texts to have used words that are better dictionary-defined into English by how the Japanese and other Asian languages interpret the words.

Therefore, since histories suggest that the name and idea of Jiaolong likely arrived from southern regions such as Thailand, then there is no guarantee of the word's origins, nor how the word gradually changed meanings through generations of use.

At present, the idea of 'spirit of the pond' feels more comfortable and in harmony with the other sentences than the idea of a physical-like creature, although, both do infer a form of 'spirit'. Nevertheless, how an individual interprets the word, so will the chosen definition somewhat change the meaning of the sentences.

Also, the English word 'sage' does not relate to the original Chinese word, but 'sage' is temporarily close enough to be used for a draft version of the sentence.

The fourth and fifth sentences will remain incoherent until the word 蹞 is accurately translated. Nevertheless, for the moment it is enough to recognize that both sentences do point to things that are accumulated to create something else.

If little things are ugly and accumulated, then the sum will be ugly, and then the ugly sum will also enable and perpetuate more ugly things, not be a beautiful mountain. It is illogical for an individual to hope for a good future while the individual continues accumulating bad things. The processes between good and bad might be similar of accumulations, sums, and end-result effects, but the end-results still reflect the tiny little things.

It is the individual who chooses their own future.

The numerous philosophical translations of Xunzi accumulated many little errors, resulting in an interpretation that is itself of error, which now will lead other people into errors. Self-thinking and a conscious awareness of small details, is not a supernatural "power" of "gods", but rather, is very common for people who give self-effort to participate in their own lives. Thales, Plato, Aristotle, and the countless others, they invented many strange supernatural beliefs that ignored and refused to accept that man cannot escape Nature, and now, the end-result, is what is seen today within western philosophy.

Compared to the many, many ugly cults throughout the world, western philosophy is relatively tame, but 'tame' does not infer 'good', nor 'logical'.

A thousand mile walk begins with the first step: doing one small, very tiny beautiful thing, is as the first step towards obtaining the spirit of beautiful. That is, after all, Nature's way, and, thus, logical.