UFOs / Orbs As Common As Sparrows,

But Not Seen If You Stay Indoors


Several dozen 4" to 6" orbs were observed to congregate every night for over five years. The orbs formed geometrical patterns and exhibited intelligent behavior. Numerous multi-colored orbs of up to about 24-36" diameter followed alongside of a vehicle for approximately 118 miles. Photos, videos, and physical evidence were collected.

Background: Living in a remote rural region can be very difficult. A semi-joke that is not fully untrue: 'I chop wood on Mondays, Wednesdays, and Fridays; on Tuesdays, Thursdays, and Saturdays I dig dirt; on Sundays I do both'. If it were not for the wild animals, some rural regions would not be worthy of living in. On our lands, I had two mothers that walked with me and watched over me; a mother quail, and a road runner mother. When my wife and I sat outside under a tree, two cottontail rabbits frequently laid at our feet (we named them Rusty and Lazy). As I sat on a river bank to watch the first light of each day, dozens of song birds would perch around me to sing, deer would walk up to within ten feet to get a drink of water, Rusty and Lazy were always there playing or lazing, the mothers were often present, coyotes howled across the river, and it was always a good time of day to be alive.

I could walk up to deer while talking, and the deer never ran away. When the deer were in our alfalfa patch, I could holler at them to leave, but they only looked at me a few moments before eating more of my alfalfa. Sometimes I would walk with the mother road runner and her family as they hunted food, and it was there that I learned how to communicate with the road runners reciprocatively. More than once my wife humorously said that I talked to the animals more than I talked to her; maybe she was right.

Repeatedly I defended all species from city hunters, including my defending endangered species. Each time that we returned home from the city during the daytime, at least two hawks would be waiting on power lines, and then slowly fly beside our truck's driver's side and passenger side windows the final mile to our land. I felt very pleased that by the time that we had lived on the land for five years, the endangered hawk population had grown from only two hawks, to then be over five. 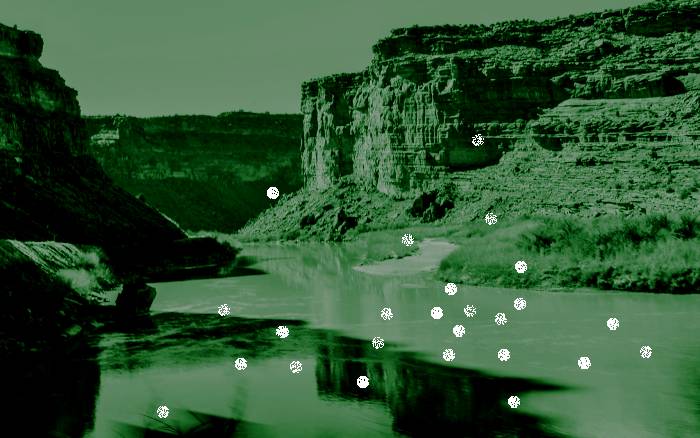 
Orbs: Aside from a few species who were not native to the region, nothing seemed out of place, including the several dozen 4" to 6" white orbs that were on our land every night for over five years. The orbs were as common as sparrows, and I normally just ignored them except at times when I would walk out on the land late at night to watch them, and to let them approach close, surrounding me on all sides and above. Similar to all other species, I was careful to not approach them too closely, and they appeared to be careful to not approach me too closely. 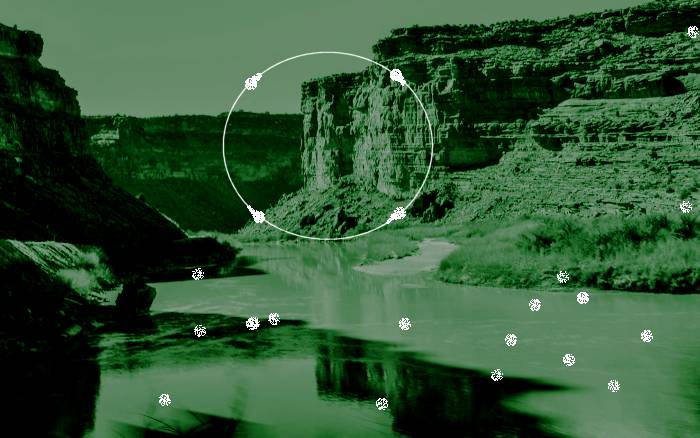 
For over 2,000 nights we watched the orbs, and each time that we moved to another property a few miles away, the orbs left the other land to follow us to our new land. My wife and I had told our relatives and friends about the orbs, but no one came out to take a look. A neighbor girl happened to drop by one night, and upon seeing the orbs flying in formation, the girl became frightened and ran away (my wife and I still grin and chuckle about it). But now, today, it can be seen to have been a good lesson in life: most people have no desire to firsthand investigate any topic. 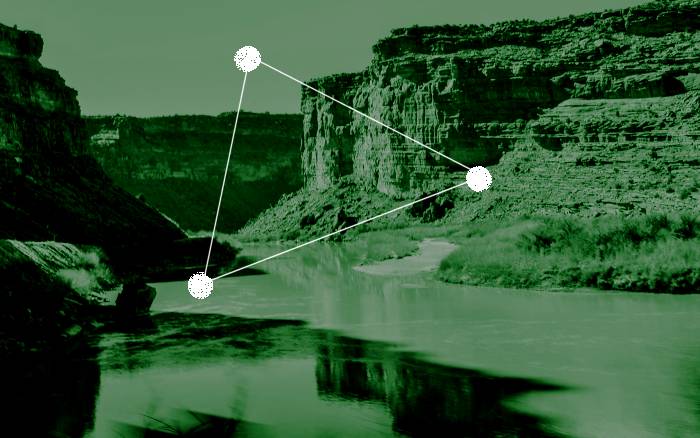 
The question is easy: what are orbs? The answer cannot be sure. If the orbs are earthquake lights or plasma spheres, then fine, okay, but, why did the orbs only congregate on my land? Why did the orbs follow us to different properties? Why did some of the orbs greet us from over a mile away when we returned to the land late at night? How was it possible for the orbs to remain in one location even during winds of over 60mph? Having watched the orbs through numerous seasons, it became obvious that the orbs' behaviors changed relative to specific influences, but without stating the details, it is sufficient enough to say that they do indeed behave as living beings.

The orbs frequently danced around like young children playing; sometimes joining together into a large sphere, forming geometrical patterns, moving in formation, and then shooting off in different directions at very fast speeds (faster than what any man-made object is able to travel). Late one night while I gazed up at the east stars for several minutes, an unfamiliar star formation had kept my attention until one of the stars suddenly shot off towards the north, crossing the horizon within about one second, which suggested that its speed was well over 50,000 miles per hour. If the specific star were a shooting star or human-made debris falling to earth, then it ought to have been moving when I purposefully stared at it for over a minute, and it should have also left a trail behind it, neither of which it did.

When the news speaks of 'UFOs' seen in the sky, a very common video is of three bright lights in a triangle formation slowly flying over a city. To my wife and I, the formation is very common, and we wonder if the UFO reports are merely our orb friends being a bit mischievous (like what young children are apt to do).

The only known things in Nature that have the capacity to form geometrical shapes relative to each other, and to then move in unison without altering the pattern, are living beings. Earthquake lights, plasma spheres, and swamp gas cannot do that. 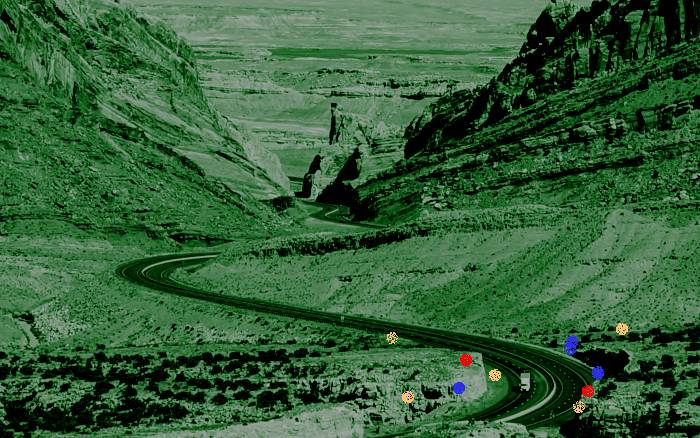 Simulation of Orbs / UFOs on highway.


Colored Orbs: While driving home from another state one night, as we exited the mountains we noticed a peculiar location of what appeared to be agricultural strobes. Agricultural strobes are very common in our region, but not common in the region that we were passing through. As we later drove through farm lands, there were hundreds of agricultural strobes on both sides of the highway, which again was normal and expected, but numerous different colored orb 'strobes' appeared to be moving at a similar speed as us. The orbs stopped moving when we stopped beside the highway, and then the orbs would move again to match our highway speed. The orbs were much too large to be agricultural strobes, their being what appeared to be near beach-ball sized. It was interesting to watch some of the orbs combine with other orbs, and to then split apart again.

Most odd to me was that their radiance was unrecognized; I know what many forms of electromagnetic radiation feel like (including getting zapped by lightning charges and plasma), but I had never felt anything similar to the orbs' emissions; the orbs were more as a 'negative' reverse-emission rather than the normal 'positive' outward-emissions.

When some of the orbs approached more closely as my wife and I both silently wished for them to be closer, their light lit the railroad soil between my truck and the railroad, which further verified that the orbs were not of the agricultural strobes on the other side of the tracks. One orb got very close to the pickup, and as my wife had her arm outside of the passenger window, she got a sizable electrical-like shock that burned her skin (photo taken).

The orbs near the farm lands were fun to watch, but the orbs continued following beside us through a small town, and then as we entered ranching lands where no agricultural strobes exist, the orbs remained following on both sides of the truck (similar to what the hawks did). At an intersection of the highway, we turned a different direction, and many of the orbs turned to continue following along beside us. When we drove down into the canyon of about 300 feet deep, still the orbs remained near the truck, which firmly settled my mind that my eyes were not merely playing tricks on me. The orbs continued following us through intersections and different highways, but as we approached a major city, few orbs followed. By the time that we arrived at our city house, only one orb remained, and it had retained a sizable distance: it positioned itself near the center of an empty field, where perhaps other people might think that it was a strobe light.

The following morning I saw that one of our two newly planted willow trees was thoroughly fried, like what happens when a bone-dry willow has been sitting for over a week (willow leaves do not become like dust within just a few hours). My wife and I wondered if perhaps one of the orbs had followed us to our house, and inadvertently harmed the tree. Perhaps yes, perhaps no, but it will remain a question that will never have a verifiable answer.

In my region, for over fifty years it has not been overly uncommon to see orbs of up to around six feet diameter flying in formation, but, you have to go outside to see them. Most people will not do that.

As mentioned years ago in Paradox Examples and Pathological Science #5 Fermi's Paradox, this topic was originally chosen to not be placed into an article. However, at present there is a usefulness in measuring the topic's online metrics. This article is highly abbreviated and omits several of the more important details, primarily for the purpose of preventing people from harming the orbs and endangered species.