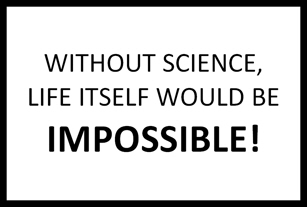 March for Science sign: WITHOUT SCIENCE, LIFE ITSELF WOULD BE IMPOSSIBLE!

Believe it or not, a March for Science protester actually did carry a sign with those words on it, and the protester openly did it in public where the protester was photographed by news reporters.

A professional shrink might say that the March for Science sign illustrates schizophrenia mixed with dementia, autism, agnosia, alexithymia, and Lewis Terman's definition of imbecility, all of which is a normal mental state for Sciencians.

Of all the grotesquely stupid things I had heard in my life, the one that settled in my mind as being the epitome of man's science was when I saw a world map for the first time, and upon my commenting that the continents used to all be together, I was ridiculed by Sciencians for my observation. It was near 1955, about three years before science permitted Sciencians to believe in continental drift, and at the age of two years old I finally accepted the fact that there was no hope that I could ever hear a rational word from a Sciencian.

Compounding the problem further is that when science decides that an old theory was wrong — which occurs frequently because all theories are wrong in some way — Sciencians quickly begin claiming that they had known the new scientific theory all along, and when someone like myself asks about what the Sciencians had previously claimed to have been perfect truth, the Sciencians deny that they ever claimed the previous theories to be true.

The recently deciphered Babylonian tablet Plimpton 322 is a good example of the inaccuracies of modern mathematics as compared to ancient trigonometry. I have personally been voicing an objection to mathematics for most of my life, and even when the current mathematics are proven to have been severely flawed, Sciencians still refuse to accept the fact that their previous claims were lies and that their god-like science was severely flawed and not true at all.

The bizarre mental behavior of Sciencians' is still present today within the topic of continental drift. All Sciencians still claim that their Science knows everything about everything, but the claims are obviously untrue. The Sciencians' inability to reason three-dimensional shapes in motion still exists today within all of science, and after more than sixty years, I still have not heard a rational word from any Sciencian, nor have I heard a Sciencian admit to their having spoken their false claims.

I appreciate the many 'March for Science' protesters for their having publicly given such a lavishly generous quantity of examples — in writing — of Sciencians' mental aberrations. The Sciencians' contradictions and fallacies are now written on signs — thousands and thousands of signs — and the words cannot now be so easily denied.

And how will the Sciencians attempt to excuse-away the words "WITHOUT SCIENCE, LIFE ITSELF WOULD BE IMPOSSIBLE"? Sciencians will invent many ad hoc excuses while claiming that the Sciencians' words meant something else, but it is too late, the words have already been written, and no quantity of bipolar excuses can now make the words disappear. 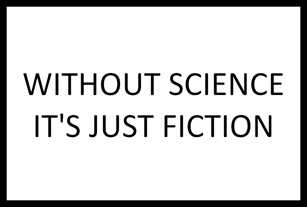 March for Science sign: WITHOUT SCIENCE IT'S JUST FICTION


Similar to most all other March for Science signs, the sign made no sense at all.

Science does not know what consciousness is, nor thoughts, memories, emotions, sensory perceptions, or anything else related to life, and so then, is life fiction because science knows nothing of life? Science knows nothing of what exists outside of three dimensions, and so then, did the sign-holder truly believe that three-dimensional matter popped into existence all by itself from nothing? Similar to the first sign, did the sign-holder truly believe that science is the ultimate god that created the universe, and that nothing real can exist without the god's approval? 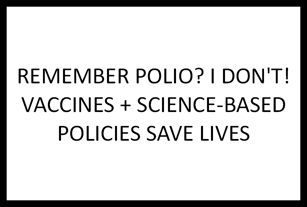 And what of the science-based policies that created the world's pollution and are destroying all living beings? And if the March for Science protester did not remember polio, then how did he know to write of it? The sign's claims are lies.

March for Science sign: GOT THE PLAGUE? ME NEITHER THANKS SCIENCE!


Plagues still exist and people still die from plagues. It ought to have been obvious that not everyone gets a plague, because, obviously, many people are still alive. Science did not stop plagues, and Science deserves no credit for some humans not having a plague. Even the lowly government employees with a 6th grade education do more to stop the spread of plagues than what Sciencians could ever do. Sciencians try to take credit for one advantage while not admitting that they are the cause of a thousand disadvantages. The sign is a lie.

In 1996 all 100% of the many local expert doctors said my wife could not possibly live more than another six months due to her severe lung and heart injuries (caused by a Sciencian of course). My wife is still alive today solely because she stopped going to scientists and because she uses home remedies, some of which I helped to create. We later learned that if she had taken the 'scientifically approved' drugs that all of the expert scientists demanded that she take, yes indeed she would have died. Science is legalized murder, and the March for Science protestors are accomplices to murder. If science were not a state-mandated religion, scientists would not be permitted to exist. 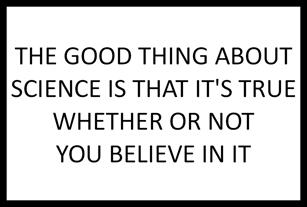 March for Science sign: THE GOOD THING ABOUT SCIENCE IS THAT IT'S TRUE WHETHER OR NOT YOU BELIEVE IN IT

Some individuals have interpreted the sign to be an appeal to authority fallacy because the words are allegedly a quote from a popular Sciencian.

The fact is, science is pretty lame and fully ignorant on almost all topics, and if it were not for a few good Researchers, science would have no value whatsoever. About all that the March for Science protesters accomplished was to further prove that their science is disturbingly unlearned, ignorant, and violently demented.

Although all of Langmuir's symptoms of pathological science are commonly found in all societies, three of the symptoms are very easily observable, especially within the March for Science protesters.

3. Claims of great accuracy — almost all adults in all developed nations truly do believe that science itself is greatly accurate.

4. Fantastic theories contrary to experience — almost all adults in developed nations fully accept scientific theories as being true regardless of the theories conflicting with what is real within firsthand experiences.

5. Criticisms are met by ad hoc excuses thought up on the spur of the moment — almost all adults in developed nations will invent emotional ad hoc excuses to defend their belief in science.