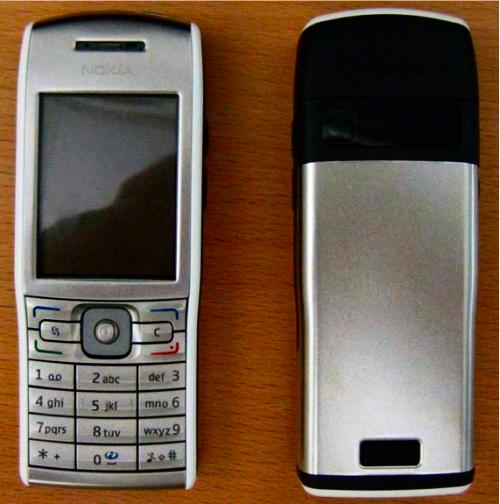 
For most all of my life I have been told utter nonsense by Sciencians who make stuff up (ad hoc excuses) and then claim that their inventions are true science. It has always been my experience that Sciencians deny that they said what they said, but now the Sciencians' words are written on signs — thousands of signs — and the words cannot now so easily be denied. 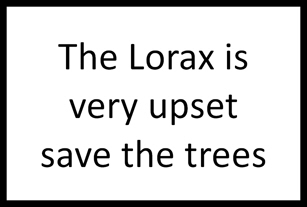 March for Science sign: The Lorax is very upset save the trees

Upon the sign — that was made of tree products — was written "save the trees". Contradictions and hypocrisy are common behaviors behind pathological science.

I had to use a search engine to find information of what the word Lorax meant. Lorax appears to be a reference to a children's Dr Seuss book. So then, if an adult carried a sign that referenced a comic book for three-year-olds, and the sign's demands were contradictory, then what did the protester hope to express?

The sign itself is immaterial, but the logic behind the sign is important. If the protesters themselves exhibited no 'scientific' knowledge, nor could the protesters express themselves at an adult level, then why should the politicians and public be swayed by the protesters' demands? To me, the March for Science protests merely reinforced my opinion that popular science is the nonsense of people making stuff up. 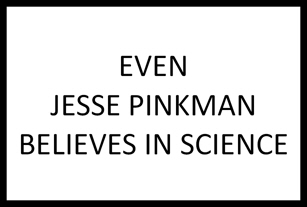 March for Science sign: EVEN JESSE PINKMAN BELIEVES IN SCIENCE

Back to the search engine... wow, the Jesse Pinkman name references a murdering foul-mouthed drug-dealing felon in a bottom-grade American television series of violence and hate. The sign 'scientifically' proved [1] what types of television that pro-science people watch, [2] what types of personalities that the pro-science protestors have on their minds, and [3] what types of behaviors the protesters believe are science.

The protesters really don't get it: they were protesting against how science has polluted the planet, and yet the protesters were also promoting the science that pollutes the world, while the protesters wanted governments to use science to fix the problems that science caused and that no protester would nor could fix themselves because the protesters are too lazy and uncaring.

Similar to the Lorax sign, what did the protester hope to express? Do Sciencians truly believe that everyone is as negative and violent as themselves, and therefore, the protesters assumed that everyone watches American television? 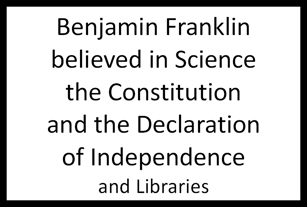 March for Science sign: Benjamin Franklin believed in Science the Constitution and the Declaration of Independence and Libraries

The words "and Libraries" were written in smaller letters at the bottom of the sign, which gave the appearance that the words were added as an afterthought.

It is very common for English words to be changed to have different meanings. Many English words can no longer be politely spoken in public because the words' meanings are now vulgar and perverted. The word gifted used to imply an individual with superior talents, but the word had its meaning changed to infer individuals with mental retardation. A known public high school in a city's poorest neighborhood on the city's worst side of town, where troubled children were sent (usually drug addicts and pregnant girls) has now had its history rewritten (by at least one historian) to have been the school where the smartest children of the city attended. Each generation uses words differently and interprets life differently while rewriting the history of the previous generations, a history that the current generation has no firsthand knowledge of. The current generation assumes that all generations were identical to the present generation, and the current generation commits the fallacy of claiming that science has always meant the identical same thing to all generations.

The word science does not mean the same thing as it did fifty years ago, nor three-hundred years ago during Benjamin Franklin's generation. The March for Science sign was as a rewriting of history, of claiming a thing that cannot possibly be true. Just because the word science may have existed, and though Franklin allegedly used the science word in The Autobiography of Benjamin Franklin (quote: "I also read Seller's and Shermy's books of Navigation, and became acquainted with the little geometry they contain; but never proceeded far in that science."), it does not mean that Franklin held a similar definition of the word as how today's generation commonly defines the word.

Far too many people worship science as a god, a name given to an unknown that is worshipped and deified with unchanging omnipresence (global, universal, existing unchanged throughout all of time), omnipotence (can do anything), and omniscience (the one true truth that knows everything). The protesters merely made stuff up, rewrote history, and claimed that their inventions were true facts (which is how their science works too).

To many of us, we do not know what people are implying when they say gifted, ethics, morals, or science because the speakers themselves do not know what their words mean. Please learn how to define the meanings of the words before speaking the words.

A person is not 'doing Christianity' when expressing love, nor is a person 'doing Buddhism' when being aware, and never must a person be 'doing Science' when investigating the nature of Nature. The Sciencians' behavior of forcing the science word upon all analyses is an act of religion. 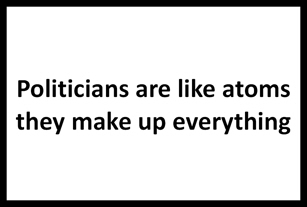 The previous sign made up stuff about science and history, and this sign made up stuff about politicians making stuff up. Unless the protester is themselves a qualified Researcher who performs research firsthand, then the protester had to believe in and have faith that science does not make stuff up. A faith-based science is no less guilty of unreasoned faith than any other faith-based religion.

I do not know much about politics, but I know enough to know that politics is politics, and the March for Science sign was political: the sign was not about science.

March for Science sign: At the Start of Every Disaster Movie There's A Scientist Being Ignored

That is a pretty bold statement, and I would like to see someone scientifically prove the sign's claim. I almost never watch 'disaster' movies, so I am unfamiliar with how the plots might evolve, but unless someone is super-bored and wants to list every disaster movie ever made, and include the proof that 100% of all disaster movies do indeed start with a scientist being ignored, then the sign is merely a lie with the aim of hating on people.

My guess is that 0% of all disaster movies begin with a scientist being ignored, and if there are any, then it would likely not exceed one to two percent. If anyone really wants to get scientifically accurate, then little things like titles and credits are usually always the things shown at the start of movies. How many movies begin with someone saying 'I ignore you scientist!'? 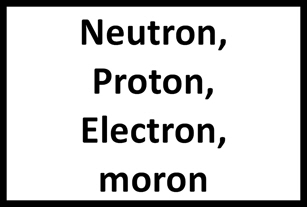 The sign had an atom symbol around a picture of Trump's face. The sign was, of course, political and anti-science in its violent negativity and hate, but there has been offered a different interpretation that made the sign not seem so bad, which also earned a humored smile: the last word was written with a different style than the other words, which suggested that the last word may have been the protester's own signature, perhaps written unconsciously (some scientists claim that their emotions and biases are all unconscious).

Apparently, the March for Science protesters did not themselves know what they were allegedly marching for, and the result was little more than an expression of the protesters' personalities — hate, violence, confusion, and making stuff up — guided by the scientific diagnosis of "He is blown about at the mercy of every gust of momentary interest":

The stupid person, whether depicted in literature, proverb, or the ephemeral joke column, is always (and justly, it would seem) characterized by a huge tolerance for absurd contradictions and by a blunt sensitivity for the fine points of a joke. Intellectual discrimination and judgment are inferior. The ideas do not cross-light each other, but remain relatively isolated. Hence, the most absurd contradictions are swallowed, so to speak, without arousing the protest of the critical faculty.

...Sometimes the low-grade imbecile starts off in a very promising way, then apparently forgets the instructions (loses sight of the goal), and begins to play... in a random way. His mental processes are not consecutive, stable, or controlled. He is blown about at the mercy of every gust of momentary interest. (The Measurement of Intelligence — An Explanation of and a Complete Guide for the Use of the Stanford Revision and Extension of the Binet-Simon Intelligence Scale, Lewis M. Terman - Professor of Education Stanford Junior University, Houghton Mifflin Company, 1916)