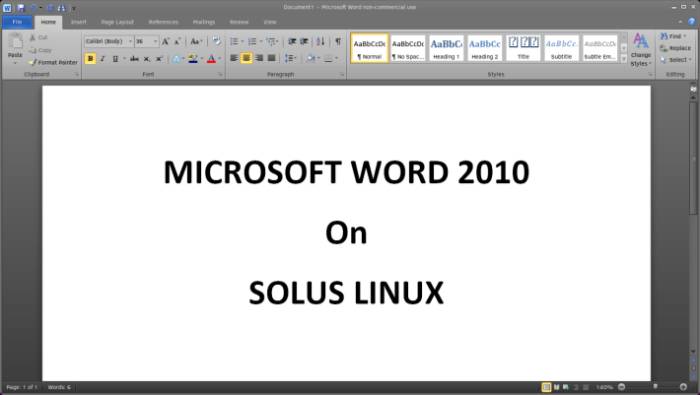 
Reports of installing Microsoft's® Office® in Linux usually omit whether or not specific features function in Word® and Excel®. The primary purpose of this short article is to list a few of the important features that work and do not work.

Prior to the tests, Wine and PlayOnLinux were installed from Solus' repository with no additional tweaking. Clicking on the Office 2010 CD's install file, Wine took control and did a surprisingly good job of installing Office 2010 (Home and Student version). Within my own personal experience, on my hardware Mint was the only distro that Wine worked well in, and so I was pleased to see Wine working well in Solus also.

Skinning: The skinning in Office 2010 was as expected; a plain shade of light grays or the bright baby blue, which is how Office 2010 looks in Windows® XP also. The skinning is usually not much important if the software works as wanted.

Display Quality: The text quality in Word on Solus is excellent, far superior than what is possible in known Windows XP, Vista, 7, and 8 pcs. With a chuckle and a smile, for display quality it is true that Word works better in Linux than in Windows.

Features: There are three features of Word 2010 that some of us rely on heavily: [1] the ability to handle large files of many thousands of pages, [2] the ability to split the screen (read the top half while typing in the bottom half), and especially important is [3] the Find column for searching through large files for specific words and phrases. In my experience, Word in Linux appears to handle larger documents fine, and the split screen appears to be functioning well enough. However, during the initial installation of Word, the Find function would work for the first word searched for, but the Find feature would not permit searching for an additional word unless I shut down and restarted Word. Weeks later after doing a full systems update, the Find function now appears to be working correctly.


Window: The Word and Excel window displays did not function properly, which resulted in an occasional loss of the header or window sizing. The problem was not fatal however, because a simple double-clicking of the title bar (or restoring-down and then re-maximizing of the window) usually always corrected the quirk until Word was shut down and restarted. It also appeared that the problem was worse when there were several other programs running simultaneously.

Load Time: On my hardware, Word and Excel load right at about twice as fast as LibreOffice's Writer and Calc. Over-all, Word and Excel still run sizably faster in Linux than Writer and Calc, but Word and Excel in Linux suffer from a lack of adaptive key buffering that appears to also be common in most Linux productivity software when keyboard repeat rates are set high (pressing the down key results in the cursor continuing to scroll even after the key is let-off).

Multiple Documents Opened: The test showed that when two Word documents were opened at the same time, the keyboard would not function on the second document. The mouse could be used for basic navigation, but that was all. When the first document was closed, the keyboard then worked in the second document. For many users, the inability to use two documents simultaneously is a permanent fail for using Word in Linux.

Stability: As a whole, Word functioned adequately, but it was not as crisp and sure-footed as it is in Windows. Typically, Word had frequent hesitations of function, of which (based upon past experiences with hesitating programs) suggests that the hesitations will eventually lead to a crash. Reminiscent of Windows ME frequently crashing and causing a full loss of data, confidence of Word in Linux maintaining stability is nil.

Trust: If a user is only needing Word for a tiny document of a couple pages, then it ought to be easy enough to see if the document's input is accurate. However, due to the general instability of Word in Linux which could easily lead to paragraphs and pages disappearing, it would not be a good choice to trust Word to retain stability in a large document.

Over-All Opinion: Word in Linux has several strong advantages, but the top two are [1] the text display is intensely superior than what is commonly seen in Windows, and [2] Word in Linux can be used in a modern operating system (like Solus) while not having to rely on Windows. As already mentioned, Word in Linux also has several strong disadvantages. Generally, if the user only needs to read and write small documents, Word in Linux will likely be good enough, but if the user needs to write and edit large documents, then the better choice would be to install Office 2010 in a virtual box or a dedicated Windows pc. For myself, I may keep Office 2010 installed on Solus just in case it might come in handy someday, but meanwhile an offline Windows pc will continue to be the choice for when I need Word and Excel.