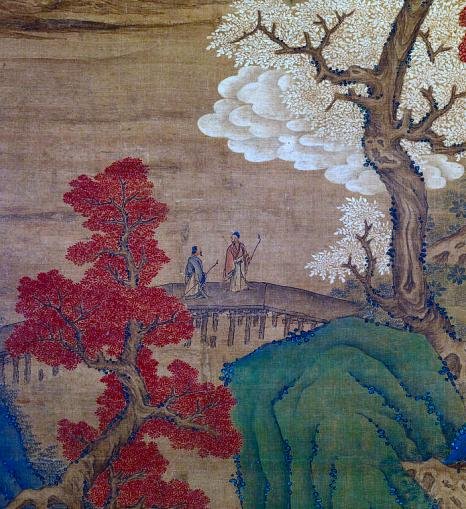 
The master speaks of his firsthand understanding,

the scholar's words point to his imaginations.

Movements at different speeds are of different durations. Scholars have given a name to one variation of differences of speed: time dilation. All durations of vibrations influence other vibrations differently than all other durations.

When a skilled individual speaks of electromagnetic fields, he includes references to voltages (intensities), amperages (quantities), wave forms (curvatures), frequencies (vibrations), resonances, harmonics, transductances, decay rates, distances, field patterns, and many other specifics that speak of Nature's way of magnetic fields. From the man's description, another man can reproduce a similar magnetic field, and a man can compare one field to another to observe what the differences are.

But when man's scholars speak of love, the scholars merely speak the word love, and do not offer Nature-based descriptions of what love might be. All scholars' writings of love are philosophical, imaginary, and do not relate to what is real in Reality.

Nature rules man. Man's philosophy does not rule Nature. All philosophical explanations of love are as mere noises because the explanations do not agree with Nature's laws.

When I was about two years old, I stood in my front yard, looked out towards the southwest skies, and thought to myself that I had sufficiently learned about 'this Reality'. Aside from my later learning additional details — and the words that point to the details — 'this Reality' has remained the same. Nothing has changed.

Nature is honest. Nature remains true to itself. Nature rules man. Nature created man. Man is a creation of Nature's. Man's nature is ruled by Nature's way. Man cannot exist nor express an emotion except through Nature's way of expressing emotions. If a man can express an emotion, then the emotion is formed within the laws of Nature.

Within the restrictions of Nature's laws, man has been enabled the ability to choose which emotion that he wants to express, but man cannot change the Natural laws that create the emotion itself.

Nature never changes. I trust Nature because it never changes. The things of Nature that I first observed in life, they are still true today because Nature has not changed. All of man's laws, cultures, customs, sciences, languages, and ideologies have all changed — all of them have changed — and I trust none because none have been true.

Nature rules man, period. Man's ideologies do not agree with Nature's ways, and so, to me, man's beliefs are unworthy of consideration.

About thirty-five years ago I invested quite a bit of time into the research of two closely-linked ideologies. After about three and a half years of research, I concluded that almost everything taught within the ideologies was false relative to Nature's laws, but there was one thing that I could not yet so easily validate as false: the teaching of love.

What is love? What, specifically, is the love that the ideologies speak of? The ideologies do not explain what they imply by the word love, and so I invested more time into determining if it is possible to discover what manners of 'love' are taught within ideologies.

The ideologies' masters may have known of the love that they spoke of, but the scholars did not know, nor did the scholars explain what their own words meant. As the existing ideologies are currently worded, they are all false, but there are manners of 'love' that might permit the ideologies as having perhaps once possessed a degree of validity.

Within Nature, the existence of specific vibrations do accompany the existence of specific reactions. All things in Nature are antennas, all things are influenced by the vibrations of all other things, and if a thing has a similar shape or relationship as another thing, then the two things' vibrations more affect the other. When a man today can walk amongst wild animals, and the animals befriend the man, then the man can observe within himself which states of his own presence were emitted and felt by the animals. Within the specific states of presence that enable the ability to walk with wild animals, the man's own self-observed state might be given the name of love.

It is indeed observable within Nature's laws that some men can walk safely amongst wild animals. If some men in ancient times were recorded to have not been harmed by wild animals, then it is plausible that the men might have been of a presence of the manner of love that animals can feel and respond to. It is unknowable whether the stories of the men might have been based upon true events, but Nature's laws do permit harmony, and so the stories cannot be denied as possible.

It is observable within Nature's laws that some men can lighten their weight when expressing a very specific chorus of emotions. Although very rare, throughout history there have been stories of a few men who levitated, and the stories spoke of the men expressing the emotion of love. Whether the stories were written of true events, still, Nature's laws do permit the variance of 'weight' by altering an object's vibration, and so the stories cannot be denied as possible.

Nature's laws permit many things that man usually never experiences for himself, because most individuals do not express the choruses of vibrations (emotions) that are necessary for the experiences to occur.

If a man can walk amongst wild animals while he expresses love, and another man might levitate while expressing love, then, obviously, the two loves are not the same, else the man amongst wild animals would also levitate. All emotions are all different, no one can experience the identical same emotion as anyone else, and so the word love has no meaning. Unless a man describes his emotions with intensities, quantities, durations, directions, and all the other Nature-based manners of existence, then his word of love is meaningless and empty of value.

道的愛 — dao de ai (dow-dee-eye) ~ way of love — this, is what I found within Nature's way. Nature's daodeai has very specific intensities, quantities, radiances, durations, directions, curvatures, repetitions, and resonances, and the song of Nature's love is very beautiful when experienced from the 中 (center).

Nature's 道的愛 is an experience, a firsthand experience within this Reality, and, as Nature's laws very clearly express themselves, 道的愛 has no boundaries. The only limit of 'love', is the body's limits of retaining intensities.

In the past, I began presenting ideas of daodeai, of the sequences, directions, intensities, and others, but the result was as expected: mankind has no interest in his own qualities. Man has no interest in the expression of a love that is within harmony of Nature's laws of creativity, and, so, man remains as he is.

Man's written words cannot be correctly interpreted between individuals. One man's love is another man's dirty desires, and the scholars' words are empty of value. 道的愛, 'way' means different things to different people, 'love' means different things to different people, and it is not possible within Nature's laws for man to accurately translate tian zhong dao li ai (heavens center way beautiful love), nor have scholars given value to their translations of 中庸 (Zhong Yong, 中 ~ Center, 庸 ~ Unchangeable). The scholars have said that 中庸 means Doctrine of the Mean, which, obviously, is an incorrect translation, and has no value.

For one's self to learn, first recognize and accept that one's self is ignorant of the thing to be learned.

The choice is to become love, to become the song of Nature, and to understand from the 中.