Myths Facts and Lies about Prodigies : Historiography of William Sidis 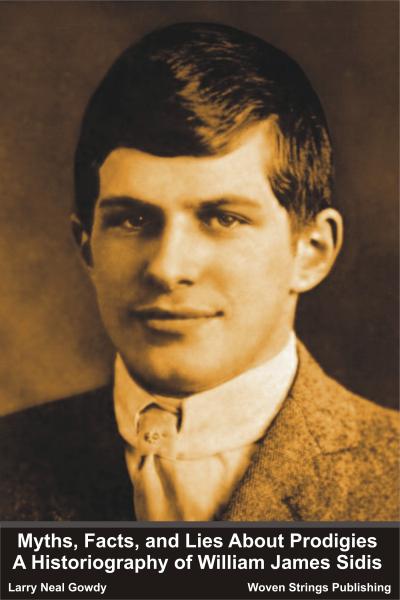 All rights reserved. SesquIQTM is the trademark of the SesquIQ High IQ Society


Abbreviated review: "[Myths] ...is an important work and contribution to intellectual history and should be presented to the public. ...the literature review is the strongest, but the intro paragraphs do a great job of outlining the significance and importance of Sidis. [It should be] visible and available for comment and review. - C.L., Ph.D.

Ex-Prodigy - My Childhood and Youth

Abstract: Myths are in part the result of individuals claiming and believing that inaccurate information is accurate, and today there exist numerous myths about intellectual prodigies. The myths' errors are easily recognized, but the question is raised of how the myths originated. This article uses the child prodigy William Sidis story as an example of how some biographies have relied heavily on popular opinion, personal bias, imagination, and little or no evidence. The biographies' misinterpretations have been directly responsible for many negative myths about William Sidis and prodigies in general. The cause of the errors did not originate from any single author nor from any one particular source, but rather the misinterpretations were the result of numerous simultaneous influences. Psychology and philosophy were two of the primary influences that existed prior to William Sidis' birth, and it was from those two influences that the general public's worldview about prodigious talents was already formed. Two additional influences were non-prodigy interpretations and the lack of evidence. The result was that for over half a century biographers belittled child prodigy William Sidis as a burned-out failure, a "woeful specimen of misspent brilliance".(1)


"...one of the greatest realizations an infant prodigy must make: He is not wanted by the community." Norbert Wiener.(2)

In 1909 Harvard held the prestige of it being the university of professor William James and of alumni psychologist Boris Sidis, a Russian immigrant. William James is still well-known for his works in philosophy and psychology. Boris Sidis was ranked with psychologists Janet, Prince, and Freud. Of the Harvard student body, five were notable child prodigies. Four of the child prodigies were Roger Sessions the musician, Norbert Wiener of cybernetics, Adolf A. Berle who was later the Assistant Secretary of State, and Cedric Wing Houghton. The fifth, a language and mathematics prodigy who enrolled in 1909 and is believed by some people to have been the smartest man on earth, was eleven year old William James Sidis, the son of Boris Sidis and godson of professor William James. Beginning shortly after William Sidis' birth, Boris Sidis used psychological techniques to teach William Sidis to read. One of the techniques was termed "hypnoidal", which is a form of pre-sleep hypnosis when an individual is more susceptible to suggestion. William Sidis learned to read by twelve to eighteen months old, and by three he had learned a degree of Greek and Latin, much of which was self-taught. Depending on whose claim is to be believed, William Sidis learned between twenty to two-hundred languages or more during his lifetime. William Sidis' mathematical talents at the age of eleven were described by Norbert Wiener as: "I well remember the day at the Harvard Mathematics Club... in a talk on the four-dimensional regular figures. The talk would have done credit to a first- or second-year graduate student of any age." Although languages and mathematics were William Sidis' early strengths, he did have other interests as well: "...his favorite subject became American history, and he announced before he got his B.A. that he wanted to be a lawyer."

Norbert Wiener also wrote of professor E. V. Huntington's class: "Both Sidis and I were in the class, and it was there that I first became aware of the boy's real ability and how great a loss mathematics suffered in his premature breakdown." During his first year of classes, William Sidis left Harvard for some months because of a nervous breakdown shortly after having given his speech on four dimensional "bodies." Opposing claims state that William Sidis had caught the flu and needed rest. Wiener also stated that William Sidis "...was left alone in a roominghouse [sic] for the greater part of the year in a Cambridge in which he had few personal friends and even fewer intimates." Perhaps William Sidis may have just wanted to go home? At about twenty-one years old he fully abandoned formal education shortly after he was arrested and charged for incitement to riot during a pro-socialist march in 1918. The events following the second so-called breakdown are what society has primarily used to judge William Sidis as a failure. As the story unfolds, William Sidis withdrew from formal academia, moved into a low rent section of Boston, purposefully chose non-academic jobs where coworkers did not know of his fame, he maintained his interests in social structuring and history, and he apparently tried to live a life away from the nuisance of newspaper reporters. By the latter half of the 20th century Boris Sidis had become an unknown to the general public, and once every few years a new article or book spoke negatively of William Sidis. What could have possibly happened? Did William Sidis really have a breakdown at about twenty years old, and if so, then why did he not receive sympathy instead of ridicule? ...


(The following is an abbreviated list of references cited in the book. Note that specific pages and comments have been removed from this list. A full reference listing is in the book.)

3. Harold Addington Bruce, "Masters of the Mind - Remarkable Cures Effected by Four Great Experts Without the Aid of Drugs or Surgical Tools".

4. Wiener, Ex-Prodigy - My Childhood and Youth.

15. Louis Menand, The Metaphysical Club - A Story of Ideas in America.

21. John Calvin, Commentary on the Holy Gospel of Jesus Christ According to John, Calvin's Commentaries.

22. Benjamin Whorf, The Relation of Habitual Thought and Behavior to Language.

23. Edward Sapir, The Status of Linguistics as a Science.

25. An interview with David Bohm conducted by F. David Peat and John Briggs.

26. Alfred Binet, The Mind and the Brain.

27. Morihei Ueshiba, The Art of Peace.

31. James, The Varieties of Religious Experience.

34. William James, The Principles of Psychology.

37. Lewis Terman, The Measurement of Intelligence - An Explanation of and a Complete Guide for the Use of the Stanford Revision and Extension of the Binet-Simon Intelligence Scale.

53. Ruth Reynolds, "Taught Son Everything But How to Live", Boston Sunday Post.

55. Harold Addington Bruce, "Bending the Twig: The Education of the Eleven-year-old Boy Who Lectured Before the Harvard Professors on the Fourth Dimension", American Magazine.

76. William James Sidis, The Animate and the Inanimate.

Myths, Facts, and Lies About Prodigies
A Historiography of William James Sidis