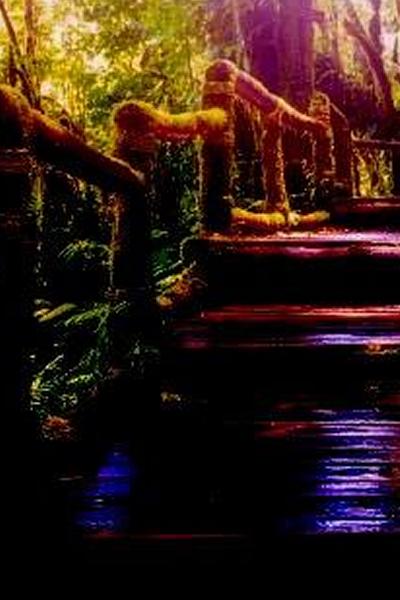 
When a man has lost hope,

when reason is no more,

what will he choose,

but to return, as before?

It is interesting to me to observe how different people perceive their world. When a person describes a willow tree, I never hear words spoken about the sounds, tastes, aromas, textures, nor much of anything beyond a rudimentary description of elementary shapes and colors. For me, I could talk the rest of my life about what a willow means to me, but everyone is different, no two living beings are identical, and it is expected that there can never exist a single definition for anything.

While enjoying the hobby of writing my thoughts, in recent months I rewrote an old unpublished fiction manuscript while combining some of the stories from my Spiritually Connected title. Having finished the book, and having determined that no one was interested in what I had written, I chose to make better use of the book by fully rewriting and expanding the manuscript for the purpose of stimulating specific emotions, those of love, sympathy, heartache, humor, grief, and happiness for other people. Since it is not possible for sensorially-limited humans to experience and to express depths of creative emotions, and since the positive emotions are fully nonexistent in my environment, then the only means I have available to experience the creative emotions of other's is through imaginary scenarios, birthed within the longings of my own heart.

The new book has over 130,000 words, and it will likely exceed 150,000 words when I later finish adding additional tensions to further contrast and to heighten the creative emotions. My wife reluctantly read the first portion of the book, but after crying over twenty times — some for happiness, some for grief for others, one of which was audibly intense and prolonged — she will not read the final chapters of which I had explained to be far more emotional and loving than the first section.

Of everyone else I asked to read the book, no one was interested, nor did anyone so much as ask what the book's topic might be, which was normal and expected, but that is okay because I knowingly wrote the book for me, for my own use, while knowing that no one else would be interested in the topic of love. In the thirty years of my writing articles about different topics, perhaps the least popular topic has been that of love. Ethics is known by publishers to be a worthless topic that the public greatly dislikes, but my ethics articles receive hundreds of times more interest than the articles about love, which suggests that the topic of love is ranked far below even the despised topic of ethics. If publishers avoid books about ethics, then so much more so would a book about love be denied publication.

But I enjoyed writing the expanded manuscript: I permitted myself to freely speak the words that I myself wanted to speak, I arranged sentences the way I wanted for myself, I chose the emotional background music that I myself wanted to hear (one of the most intensely emotional sections was accompanied with Joe Bongiorno's Mesmerized), and I created beautifully loving characters that I very much wished were real in my own life. I can now laugh about the hundreds of times I attempted to hide my crying eyes while writing: it was all worthwhile: self-therapy.

After I finished writing the central stories of the book and had the primary sections fully edited, I discovered that most of the individuals that I had created had in fact been real people with the same names, and who had lived similar lives while aiming for similar goals. Humored with the discovery, I further researched the individuals and found numerous other strong parallels between historical individuals and my fictitious stories. I had chosen names by how they were felt to be in rhythmic harmony with the stories' plots, and though coincidences do occur — sometimes startlingly similar, like the Kennedy-Lincoln coincidences — still there were additional parallels that suggested that there was more to the similarities than mere coincidence.

One of the main characters was given a name and a new goal in life as the originator of an ideal, and the individual who further advocated the ideal was given a name that was felt to not be perfect, but close enough to permit the desired emotional bond. I later discovered that the main character's name was indeed associated with the same general ideal and name, and the second person's name was indeed the second person to advocate the ideal, but the second person's name was slightly different with switched vowels to permit a variance of gender. Most amusing was that the second person's face, that I had visualized with love while writing, was very similar to the person shown in an old photograph, kneeling beside the real second character (possibly the character's own child, like in my own story). The real-life individuals were beautiful, of heart and soul.

Of the numerous other parallels, I was additionally humored that I gave the name of a plant to a group of individuals, and yes, the name was what was used by those specific individuals. I invented a symbol for the group, based upon my own personal symbol, the symbol that I have carried throughout this life as my own, and yes, the symbol is a portion of what the real group used. On and on the similarities were remarkable, and though the similarities are interesting, the primary purpose of the book — to spark specific emotions — remained to be the sole importance.

As I edited the book's imaginary scenario, I remembered a 'dream' of almost twenty years ago, a dream that was as beautiful as the invented scenario, of the exact same location, of a parallel event, and of an unknown individual standing and observing as I observed the person from a different angle, and yes, the individual was of the same gender, same height, same nationality, and same personality as the invented character's. When the real dream occurred years ago, it was curious to me, and I was puzzled why there was an unrecognized individual in the dream, especially one that did not fit-in with the beauty of the other events, but in those years I had had numerous similar dreams, and so I ignored the dream and allowed it to pass from conscious memory. But now the dream made sense, of why there was an unknown individual standing to the north, and why I observed him from a specific point of view.

The dream had been remarkably beautiful and important at that time, with real emotions, real sensorial perceptions, and real events, and now the presence of the individual is finally understood. I am, of course, omitting the most important and descriptive parts of the dream and scenario: I know what the answers are, and I know that most people would assume a different answer, but that is okay, because it was my dream, my thoughts, my heart, and my experience; not theirs. The reasoning of why I mentioned the similarities is related to the experience of love, but I will not pollute the topic further by speaking of details.

The new book's purpose was achieved — I still cry with love and happiness when reading it — and that will remain the book's sole purpose: a benefit for my own personal use; created by me, for me. If the public were to have a measurable interest in love, perhaps then I might make the book available to the public, but the public does not want love, and that is okay.

Emotions flow, with depths and widths and speeds and intensities and hues, and memories are formed within the emotional tones. For the man who feels with the heart, his memories and thoughts are fluid, deep, stable, and creative, but the man who thinks with academic knowledge, his thoughts have no depths, and his memories can be changed willy-nilly to conform to any new knowledge. The man of knowledge has memories formed as if the blocks of children's toys, with each knowledge placed one upon the other, separate from the other, and with no reciprocal interaction between one block and another: no cross-lighting. The man of heart, his knowledge is formed upon firsthand experiences, his memories are as oceans of waters, fluidly interacting with all others, with depths of calmness, and his mind glows of consciousness.

In recent years I have discovered three new wonders, with each being directly related to the emotions of love, and I marvel at the potential that man possesses, but, it is a potential that cannot be realized, because man cannot feel love; will not feel love. I repeatedly offered the information to everyone who would listen, but no one was interested, not one, and I am astonished that man so despises love.

But my emotions are mine, formed from within the male point of view, and I remain curious of what the female point of view might be, of whether the female cries for other people for similar reasons, or from a different perspective. So many questions, but never an answer, and so I stumble along, testing different approaches, with the goal of someday touching a heart not my own. I have made progress, but this is only a first step.

Within the fluid flow of love, it is as if the recognition of a willow's scents and tastes, enabling a cognition of the tree's nascenting natures, and within the fluid love is the cognition of harmonies within Nature, the harmonies that create Nature, and guide man. My first perceptions were colored with love, as were my first thoughts; a state of being, a state of presence, long before the body would learn the natures of desire and lust that mark man's definition of love. My love, obviously, is not man's love.

I now do believe, that if the opportunity should ever rise again, I may return to be near a location like that of my dream, where I could again sit upon the hills, enjoying the creative emotions of the animals', where I could invent more scenarios in my heart, and daydream of an age when real humans walked the earth, touching each other's hearts.