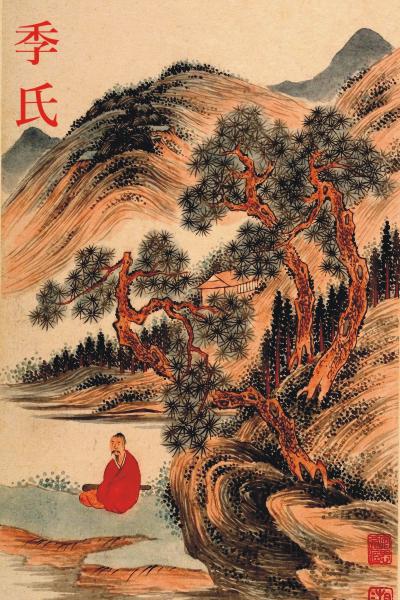 As written of Ji Shi book #10, while searching for the original source of an alleged Confucius quote in Consequentialist Ethics, it was found to have been from one of Lionel Giles' books, which then led to the book of Ji Shi to find the correct quote, and has now led to several other ancient Chinese books.

As has been my practice for years, I usually work on at least three projects simultaneously. My current practice of three is to translate Chinese texts, write articles as a means of articulating to myself how the Chinese topics are structured, and writing a hobby book. When one project becomes tedious, tiring, and/or boring, I change to another of the three.

In recent days I was studying the design of an ancient Chinese word. The word's design does not agree with any known dictionary, reference material, nor agree with any academic translation. The word's design has two portions that are obvious, but a third portion was unknown to me. A common dictionary definition could be force-fitted with weak analogies, but still the analogies could not harmonize with the sentences' structures and mental patterns. After hours of studying the word's style, and not making positive progress, I chose to take a break.

While taking the break from translations, I was reading over an early portion of the hobby book, and came across a sentence that closely related to the specific ancient Chinese word that I had been unsure of how to translate. Having regained interest in the word's translation, I compared numerous other ancient Chinese books' use of the word, and found that the translation was indeed very accurate: one of the most accurate of all words translated.

Happy with the translation that is not available in any known reference material, nor synonymous with any known English word, when the word is used within a specific Confucius quote, the quote magnificently comes alive with meaning and great beauty.

Exultantly elated at what I had discovered and verified to be correct, I excitedly told my wife about the topic, and she replied with the memory that about thirty-seven years ago I had been searching for a thing of value that could be placed within words. Within that past era, I had invested several years into researching all known writings of all known related topics, but in none did I find any author worthy of hearing. I have found one now.

Qinren (Laozi) of Daodejing has many good thoughts, and Xunzi also, but in none do they stand out as being as remarkable and as valuable as some of Confucius' quotes.

This article began with about two-thousand words of translations, definitions, and explanations of the topics that surround the Ji Shi book and other's, but upon translating a new paragraph, and then comparing the translation to other translated books within the Analects, it was found that the translations cannot be made public; not even as draft translations.

Within one of the Analects books is a paragraph that is very articulate of wording that defines how a specific ancient Chinese word ought to be defined. When the definition is used within other books, the Confucian quotes come alive with real-world meaning. Accompanying the paragraph is Oxford University employee James Legge's translation, one of his absolute worst translations, which concretely proves that he had intensely severe mental problems. I would like to quote Legge's translation for evidence, but doing so would simultaneously expose the original paragraph. It is of more value to protect the good thing than to prove a bad thing bad.

He who casts pearls, is most harmed.

At present I plan to not again publicly present any Confucius quotes that might hint of the best ones.

If an individual is interested in discovering Confucius' best quotes, then the individual has the option to do as I did... invest decades into the search.

The result is worth far more than the effort.