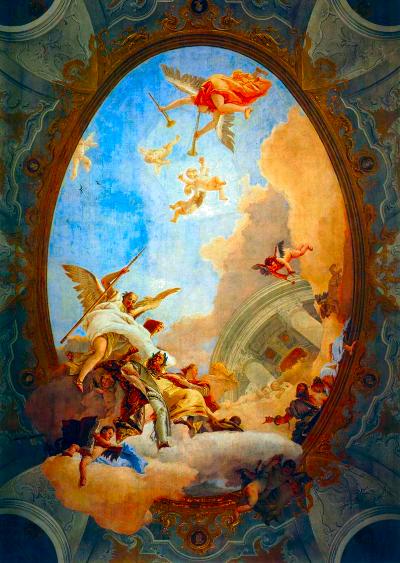 (PD) Tiepolo — Allegory of Merit Accompanied by Nobility and Virtue


"Waste no more time arguing about what a good man should be. Be one." — Marcus Aurelius

A brief definition of Virtue Ethics: "Virtue Ethics is a classification within Normative Ethics that attempts to discover and classify what might be deemed of moral character, and to apply the moral character as a base for one's choices and actions."

The general concept behind Virtue Ethics is that it focuses on what the individual should choose for his/her own personal inward behavior (character) rather than the individual relying solely on the external laws and customs of the person's culture, and if a person's character is good then so ought the person's choices and actions be good. There is value in the ideals of Virtue Ethics, namely the value of directing the individual's attention away from following popular opinion while placing the attention back upon the individual him/herself. If the words "virtue," "ethic," and "moral" held clarity of definitions, then Virtue Ethics would surely become an excellent source of knowledge and teaching. Unfortunately, virtue, ethic, and moral have not yet been given a clarity of definitions, and so at present Virtue Ethics is not as effective as it could be, and within another view, Virtue Ethics may have become but one more variation of an external rule or custom for the student to follow. If a student does not yet know the origins and nature of virtue, ethics, and morals, then the student must accept the teacher's teachings to be true, and the student will still be following an external rule little different than if the student were following a social law or custom.

The combining of two unknown words, that of virtue and ethics, does not create a known thing. It is most useful to first define what virtue implies, and to also define what ethics implies, and only then place the two words together as if their phrasing might create a rational communication of intention.

One use of virtue is that of speaking of a thing's power, as in through the virtue of strength did a man murder his neighbor, but logic screams in defiance that a thing called virtue, that enables a man to commit horror upon other living beings, could possibly be of a similar interpretation of a man whose virtue is measured in love and kindness. If a word has meaning, then the word has meaning, and the meaning should remain rigid in its definition, and never should the definition be allowed to be changed willy-nilly to meet the use within a sentence structure.

"Know the thing first, and then give it a term, one that is singular, definite, and unchangeable. If a word is given to an unknown, then the word's definition will be unknown, and never should a question arise concerning the word's validity." Larry Gowdy Logics Origin of Ethics, Morals, Virtue, and Quality.

A general view of the language among many animate creatures is what might roughly be termed as emotional songs, perhaps not so different than bird songs. As dogs may have a vocabulary mostly limited to barks and whines, and as a road runner bird's vocabulary might be mostly limited to clicks and whines, the communication within the vocabularies is predominately expressed and interpreted as emotional, with the receiver of the communication self-creating a sympathetic emotion within the animal itself that is similar to the emotion that existed within the animal that made the sound. Most humans easily recognize the differences between an angry bark and a playful bark, especially when accompanied with the visual evidence of emotional body language, and similarly many animals exhibit a similar ability to recognize the emotional content of other animals' vocalizations. One of the advantages of the human mind is that it can apparently recognize and rationalize more details of a sensory perception than can most animals, and thus it then becomes possible for the human to have a more complex vocabulary. Nevertheless, there are limits to the human mind, and the quantity of recognizable details will vary from individual to individual.

The point where this is leading is that there exists a human tendency to hear a word and then self-create a sympathetic emotion of what the word might mean to the individual — similar to the method of most other animals' — but not necessarily interpret the word as what the speaker intended. The word "virtue" is one such word that some individuals may interpret to imply a type of strength or power, while another individual may interpret the word to imply a type of righteousness and purity. There is a remarkable ability for many humans to speak a few undefined words that hold within them no useful quantity of clarification of what the speaker intended, and yet the listener is able to take the words and self-create an emotional interpretation that is very close to what the speaker implied and in a very similar manner as animals'.

Many psychology tests well illustrate this, where an undefined question can be asked, and roughly ninety-nine percent of humans will be able to honestly answer the questions on a five or seven-point scale of whether the test-taker agrees or disagrees with the question's conclusion. Individuals with more life-experience and a higher potential for rationalizing details cannot truthfully answer the questions because the questions are absurd. Without alluding to any particular test, an example of the questions might be "are you the first to make up after a fight?" The test assumes that your personality is one that gets into fights, but the person who is emotionally stable and does not get into fights cannot honestly answer the question since the only answers permitted are those that range from "always" to "never." Another example might be that of asking if you become emotionally involved when watching football on television. If you rarely watch television, and never watch football, then you cannot honestly mark an answer that ranges from "always" to "never." The majority of humans who have similar modes of thought processing and who share similar experiences in their cultures, they have no difficulty with the questions, and the individuals are able to leap to similar conclusions and interpretations as most other humans' even when the questions do not pertain to anything concrete.

The closeness of interpretation is in part due to the shared experiences of the speaker and listener, as well as the limited quantity of possible variables within the individuals' society, but when placed upon a scale of weighing the intricacies of the human vocabulary to that of other animals', it is found that humans interpret speech in a similar manner as many other animals, which implies that the words themselves may not be understood through a rational sequencing of what the words' definitions might be, but rather the words merely imply what the individual is able to emotionally self-create. The words "virtue", "ethics", and "morals" are similarly vague and commonly self-interpreted by how the listener believes the words apply to him/herself.

It is not useful to the mind for mankind to claim that the word virtue has a thousand different definitions, and that each definition applies to how the word might be used in a sentence. Though mankind prefers languages of undefined words, resulting in thousands of years of debating the unknown words, still, there is no necessity that an intelligent man must mimic the same behavior.

Virtue is the most simple of things to clarify, both of definition and of origin, but the simplicity arises within the firsthand experience of being virtuous, and if western philosophy were to choose a more favorable method of teaching, then it would teach each student how to achieve, witness, and understand virtue through the student's own personal experience.

There is a humor in a young boy, who, about one-hundred years ago, loudly complained that a restaurant's employee served breakfast prior to the hours stated within the menu. Many people believe that the young boy grew up to become the world's smartest man. There exists a difference between the average mind and the prodigious mind, with the average mind choosing to accept inaccurate words as having accurate meanings, as well as accurate words having inaccurate meanings, but then too, the prodigious mind may be so strict that it might not catch the intended meaning at all.

In all things in the universe, all are composed of three or more components. If a person cannot describe in detail three components that create virtue, then the person does not know what virtue is.


Update August 23, 2020: A useful parallel to the topic of virtue ethics is found within the 22nd chapter of the ancient Chinese Xunzi book. The chapter is named Correct Name. The problem of people using wrong names has been around since long before recorded history.

One of the high values of Xunzi is of how articulate the author(s) presented his ideas. Chapter #1 is named Encourage Learning, and the chapter gives numerous examples of firsthand learning (e.g. climb high mountain, walk deep gorge), while also speaking against 'ear to mouth' word memorization. Unfortunately, all known modern academic translations interpret the chapter's words to imply 'studying' by reading books and memorizing words. Apparently, the translators — who were themselves university teachers — did not know what the word learning means.

The path to defining the word virtue is to first be virtuous oneself. Inventing false definitions of unknown words renders the individual unvirtuous.

(Aside from this update notice, the article's wording has not been changed from it's previous version.)