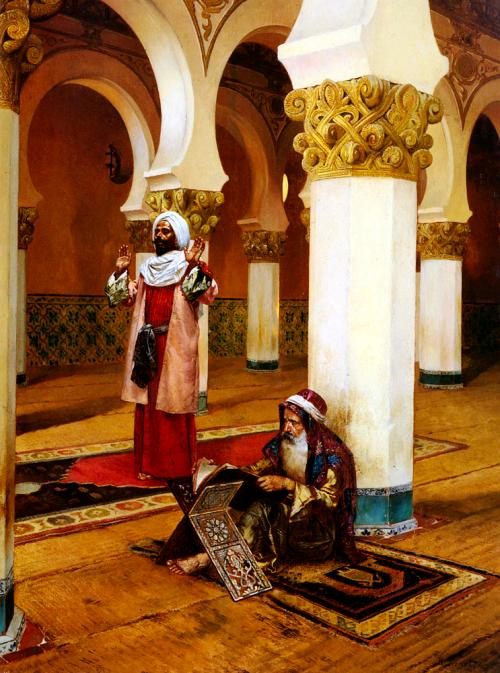 
"The ink of a scholar is more sacred than the blood of the martyr." — Mohammed

Similar to most all other ideologies, Islam bases its beliefs and standards on the books of its faith, which for Islam are the Qur'an and Hadith. Also similar to Christianity and other religions, Islam interprets the definition of what is ethical by what an individual deems to be right or wrong in the books' stories and teachings. Again similar to most all other ideologies, if a question of correctness in ethics might be raised that is not agreed upon by all of the different ideologies' books, then there will be no agreement by the followers because the concept of ethics itself is an unknown.

Islam holds for itself a degree of importance on one's intelligence, and it is useful for an individual to ask him/herself the following questions:

Did Allah create Creation, or did Creation create itself from nothing?

If Allah created the laws of Nature, then are Allah's laws just?

Which is the greater; Allah's laws or man's laws?

If an ethical thing is good, then are Allah's laws ethical?

If Allah's laws are to be obeyed, then is it wise for a man to learn of the laws that Allah placed in Creation?

The laws within Creation state that Creation can only exist through creative action. Is Allah creative?

Is not a man acting against the laws of Allah's when the man is behaving against creativity?

If Allah created all things upon the law of three, then is an ethic composed of three or more things?

What are the three or more components, created by Allah, that combine to create the thing called ethics?

"As to those who reject Faith, it is the same to them whether thou warn them or do not warn them; they will not believe. Allah hath set a seal on their hearts and on their hearing, and on their eyes is a veil; great is the penalty they (incur)." Qur'an, Surah 2

The Buddhists, the Christians, the Jews, the Atheists, the Europeans, and all of the philosophers are blinded by the belief that ethics are a thing that are born within — and are to be measured by — each of the ideologies. Who will step forward and declare that ethics are visible for all men to witness and measure within Allah's laws of creation? If a Muslim is sincere in his faith, then will he not learn of Allah's laws, and know the things that combine to create ethics, morals, and virtue?

In Allah's laws of creativity, the three or more components of a thing must exist in harmony, else the components will repulse the other and fail to create the new thing. If Allah is ethical, and if Allah's actions of creation are ethical, then is creativity through harmony an ethical act?

If every word written were discovered to be in error, whether the words were written or spoken by Abraham, Jesus, Plato, and Mohammed, would Allah's word still remain true?

And if Allah's words and laws are forever true, then look at what Allah wrote in His creation, and become a scholar whose ink will forever be more sacred than that of the martyr's.