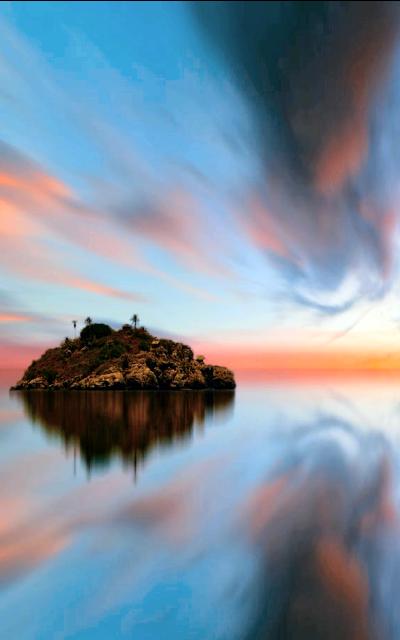 It 'I am' amongst nascent together it placer.

All by it divided... then, separate (from) it divided, not one that divided.

Nothing name heaven earth it nascent.

Exist name all things it birth.

All things nascent how.

Infinite-eternal nothingness no cause, then cause-effect finite-temporal nascent large noise.

Also interesting is that creation stories throughout known world histories have gone through cyclic patterns of evolving and devolving. Around four-thousand years ago, creation stories were silly tales of human 'gods' who had troublesome mental and marital problems, which are useful stories of illustrating the mentalities and relationships of the people during those eras. Beginning around twenty-five-hundred to three-thousand years ago, some of the creation stories began attempting to apply rational human reasoning to the origins of the Universe. However, the cyclic patterns continue to fluctuate, and at present, modern creation stories have devolved back into irrational silliness sans the 'disturbed gods', while again (unwittingly) inserting human and divine consciousness into the act of Creation's nascent.

When the first four creation stories are interpreted from a 'physics' point of view, the stories might appear to be close to what is rational, with stories #2 and #4 being the most straight-forward and the most rational. The 5th creation story is purely for fun, but not far from what is popularly believed today by most everyone on earth.

Nature is what is logical, and all rational reasoning must use Nature's way to be the standard of what is right and what is wrong. If a belief does not agree with Nature's way, then the belief is wrong, as well as being wrong relative to the Source's logic that created Creation. All things in Nature are composed of ingredients, which is obvious, but many creation stories, including those of western philosophy's, claim that 'matter' is solid and eternal. "Aristotle, the prince of philosophers, dreamed of the eternitie of the world. Plato, his schoolmaister, shooting somewhat more neere vunto the marke, wandered notwithstanding somewhat from the trueth." (Thomas Tymme to Lord Ambrose, Earle of Warwicke, circa 1563)

When an author of a creation story does not know that there is no such thing as a 'solid' — even some infants know that when first born — then the author's creation story will illustrate that the author claimed things that cannot possibly be true, and the false claim causes the surrounding texts to also lose credibility.

The moral of the story is obvious: many people throughout history have invented creation stories, but the stories' absence of logic verified that the people did not know much of anything about Creation, nor did the people have firsthand experience with the topic, nor were the people capable of self-thinking. The result, was of many creation stories that made no sense.

Likewise, many translators of ancient Chinese texts insert the English terms that best fit the translators' own firsthand understanding of the topics, but not use wording that reflects thought and an awareness of the obviousness within Nature, nor within oneself.

Other examples are countless. Two brief examples within Daodejing, Legge wrote [1] "This is what is called 'The mysterious Quality' (of the Dao)" (#10 是謂玄德), and [2] "this is called its mysterious operation" (#51 是謂玄德). A different translation, by an individual who allegedly speaks 'classical' Chinese, chose "mystical virtue" as the two last words on both sections, but also while inserting several irrelevant and misleading English words.

The 'deep-obscure' word hints of tiny deep roots descending into earth, suggesting hidden from sight and not easy (but not impossible) to dig up and to look at. Individuals who are able to self-observe and to self-think, they are aware of the 'deep roots' of virtue, and there is no 'mystery'.

Regardless of the translations' choice of 'mystery', the translations' surrounding English words are themselves contradictory, misleading, and do not follow rational patterns of mental structure. The 'classical' Chinese translation is itself a translation of a translation of a translation, while not being accurate in any, nor while connecting and cross-lighting mental durations between the sentences. The 'classical' Chinese version's pattern is of modern American English as a second language while toned of modern Chinese mental rhythms, which is fully acceptable within academia, and quite good for use of communicating basic conversational topics between modern English and Chinese speaking people, but the modern slants disable the ability to convey pre-modern patterns, and thus faulter when attempting to translate ancient patterns.

Almost all healthy children have learned to talk before school age, and most little children can speak the word 'virtue', but no sensible adult expects a little child (nor an adult philosopher) to be capable of participating in an in-depth discussion of what 'virtue' means. The ability to speak a language, any language at all, does not automatically infer that the speaker knows what the words mean. The 'classical' Chinese translation is based upon a youthful interpretation that may have truly believed that the previous adults' translations of "mystery" were accurate, but the translation was fully too young to have experienced enough life to recognize adult words, as well as far too inexperienced to know what the topic is.

Logic... first understand a topic through firsthand experience... self-observe, and self-divide... and then compare what is real in Nature, to what is written in stories. One-mind reasoning...