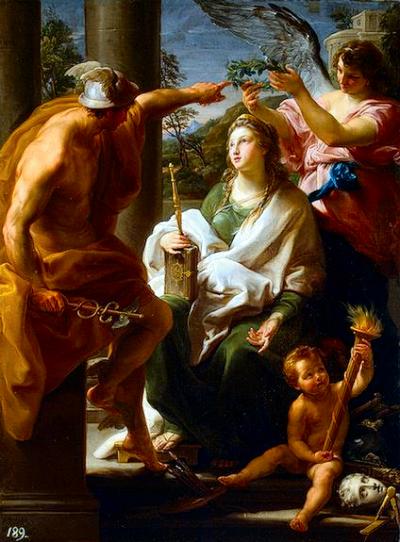 
"Two sorts of writers possess genius: those who think, and those who cause others to think." - R.W. Emerson

Almost thirty years have lapsed since I first read a book of western philosophy, and though I once enjoyed the mental patterning of Greek, no longer does the topic hold the interest of new discovery. Nevertheless, there does still remain a degree of personal pleasure in recreating the patterning when referencing a manuscript's original thoughts.

Aristotle's Nicomachean Ethics has received numerous different English translations from countless individuals, with none of the variations having received unanimous agreement on which choices of English words might be best used. Observe the following translations of the manuscript's first words, and recognize how it is that the meanings behind the words of Aristotle's are not likely to be well understood within the very schools that hold Aristotle to be as the master of philosophy.

Translation by W. D. Ross: "Every art and every inquiry, and similarly every action and pursuit, is thought to aim at some good; and for this reason the good has rightly been declared to be that at which all things aim."

Translation by H. Rackham: "Every art and every investigation, and likewise every practical pursuit or undertaking, seems to aim at some good: hence it has been well said that the Good is That at which all things aim."

Translations by numerous sources and used by The Project Gutenberg: "Every art, and every science reduced to a teachable form, and in like manner every action and moral choice, aims, it is thought, at some good: for which reason a common and by no means a bad description of the Chief Good is, "that which all things aim at."

A rough draft translation by myself, one that retains a portion of the original mental patterning: "All skills of hand, and all methodologies similar, but performing actions, and of choosing good any one thing, to give to thought, of which is beautiful to illustrate good, that the whole to give distinction but any one thing, to bring to light the fulfillment that."

Slightly smoothed and in American English: "Similar to all skills of hand, there is a similar methodology of performing mental actions that choose a thing as good, and to present to the mind that which is beautiful, which illustrates to the mind what is good, and that the whole of the thought is to give distinction of that thing, to bring to light the fulfillment of recognizing what is good."

Although I have purposefully not given my favored translation here, still it is obvious that the differences of translations present serious difficulties to the reader who is unfamiliar with both the Greek language and the mental patterning that different individuals possess. The Project Gutenburg variation has the flaws of using the modern terms of science and moral, rendering the translation as both absurd and detrimental to all students hoping to learn of Aristotle's thoughts. The term science has a distinct interpretation in modern-day English, and never can it be rationally believed that Aristotle might have held within his mind a similar interpretation and definition of the word methodos. Likewise, the word moral is similarly ill-chosen, for the word is an English word derived from the Latin and turned upside-down without meaning, and never can an undefined modern word be synonymous to an ancient word of a different tongue. Modern translations too often implant modern words into ancient writings, which results in modern readers interpreting the ancient writings under the light of modern definitions, which further results in modern readers fully missing the thoughts of the writers, which further results in the modern readers inventing new and silly beliefs that have no logical connection with the original authors.

If Aristotle were an intelligent man, then his thought patterns were not of a common variety, and thus his words should not be translated as if the patterning were common. Each specific stratus of intellectual capacity exists within a patterning of its own, and recognized as existing within its specific mannerisms, and if a mannerism of patterning can be laid upon a man's words, and the man's words match the patterns, then the man's intellectual presence can be made known with a high degree of confidence. Aristotle's mental patternings fit those of a higher intelligence, and thus his words should not have been translated within a common frame of English.

The student and the layman, who read any of the popular versions of Nicomachean Ethics, may be given a wrong path to follow, a path whose only destination is error and ignorance. But why, a man might ask, is not a favored translation available to the public, and why is my own translation kept private and not made public? The reasons are simple, and the reasons describe the nature of man, that man much prefers to read and believe in words that the man can receive for free, rather than for the man to spend an hour's wages to purchase the useful words of the several different authors'. Man so values his dollar, that he will give himself away to error and ignorance for the several dozens of years of his life, rather than part with one hour's wage, that is, man prefers ignorance, and man proves his ignorance by willfully choosing ignorance. Man's chosen choice, to value a dollar above that of knowledge, is the triangulation point established with logic by the man, and the choice is near to what we might term an ethic, albeit a bad one.

It is useful for the reader to observe within him/herself and determine with conscious logic why it is that the reader may judge the dollar as having more weight than useful knowledge, and within the observation, observe the act of logic, the how and why, and recognize one's own mind as it forms the thing we term an ethic.