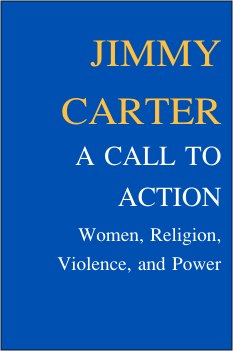 Jimmy Carter - A Call To Action


A Call to Action focuses on the injustice of global discrimination against females and how the Carter Center and other organizations throughout the world have made good progress towards curbing the discrimination while also alleviating many health and social problems. Carter's style of writing is straight to the point and intelligently assembled; a delight to read. The topics within A Call to Action are important to me, and they should be no less important to everyone else.

Carter's description of his childhood is beneficial and very much appreciated because it lends us an idea of how his thoughts and personal standards were formed. Jimmy Carter grew up in a region of the USA where his white family was the small minority, and he formed his own opinions of equality by what he observed in his own life as well as by how he interpreted his religious beliefs.

I do not have a least-favorite topic simply because I care so little for some topics that I do not so much as exert the effort to judge which topic is worse than the other. Politics might not be the most boring topic to me, but it is lumped together with several others in my mind as being a waste of time. Carter's mention of the United Nations’ Universal Declaration of Human Rights resulted in my finding and reading the document online; the result was what I expected and the reason why I place no value in politics. An example from the Declaration:

"Article 26. (3) Parents have a prior right to choose the kind of education that shall be given to their children."

I will enter into the document further in a different article, but for the moment it is sufficient to quote Carter's opinion about the Declaration's promises of female equality: "It is shameful that these solemn international agreements, later ratified by national legislative bodies, are being violated so blatantly." I fully stand with Carter on his assessments. Parents in the USA are strictly forbidden to choose the kind of education wanted for their children, and more so for female children. The global discrimination against female education is fully unacceptable.

Carter provides several religious examples of how females were once regarded as equals in Christianity but are now often held with disrespect. The topic of equality is what piqued my interest in Carter's book, and he presented the religious interpretations very well while retaining a positive tone.

The majority of the books that I read are either classics that date back thousands of years, or the recently written books that pertain to events that occurred in recent decades. A Call to Action has numerous references to events as recent as the past few months.

Most of us in developed countries are not aware of the injustices occurring throughout the world. I believe that A Call to Action is important, to remind us that our normal quibbles are unimportant when compared to the suffering of others' who will never have the opportunities that we take for granted.

One advantage of getting older is that it permits a wider view of how human social behavior shifts from one extreme to another. Fifty years ago it was common in the USA for females to be given higher respect than males. Males would hold doors open for all females, but not for males. It was common that males might speak roughly to each other, but the same males would quieten their tone and speak carefully and gently to females. It was common to exhibit respect for other people's mothers, daughters, sisters, and wives. Not today. Today it is common for American television and commercials to portray all females to be 'equal', and therefore 'equally' disrespected as males. Especially harmful is the common television portrayal that all females — especially white females — are not permitted to have a personal opinion of when and to whom they must mate with. Today's fanaticism of 'equality' is in the process of rendering females to be of a lower status than farm animals, much like how females were — and likely still are — treated in primitive cultures.

The causes of today's sociopathic behavior are innumerable and include the purposeful perinatal malnutrition of the 70s and 80s that attenuated the fetus from forming emotional bonds with the mother — and thus attenuated respect for all females — but perhaps the leading cause is of the self-proclaimed 'equality' fanatics screaming their hate towards everyone who does not bow to the fanatics' dementia. No quantity of laws and education can stop the fanatics' insanity, and perhaps the best immediate choice is to simply stop using all social media, stop watching broadcast television, and stay as far away as possible from social influences. The best method of protecting one's family, is personally protecting one's family.

Over three-thousand years have passed since the Laozi words of virtue were written. Confucius, Xunzi, Jesus, the list is long of men who spoke words of virtue, but still the words did not make mankind better nor smarter. Jimmy Carter's book is a good modern illustration that regardless of how much an individual might attempt to speak sense to society, you still cannot make mankind better, nor smarter. No religion, no science, and no philosophy has ever won over the minds of stupid people, and never will. Unfortunately, there are a lot more stupid people than intelligent people in the world. Amongst the most stupid people are the 'equal rights' fanatics, who, instead of promoting unequally high respect for quality humans, instead scream that people with the lowest intelligence and the lowest personal qualities are "equal" to the people with the highest intelligence and personal qualities. The fanatics are pulling everyone down to be 'equal' to the very lowest human, and most all known governments are forcing it with laws.

In the 70s, American companies were stressed over the new 'equal rights' laws. As one employer phrased it, each time they hired a new 'minority' employee, they also had to hire an additional qualified employee to go behind the 'minority' to fix what the 'minority' employee messed-up. Many manufacturing companies quickly left the USA. An example is of the local telephone company having twice sent out females to fix a simple and obvious telephone problem of static — oxidized copper wiring — but neither female was able to figure-out the problem. Finally the telephone company sent out an older man who saw and fixed the obvious problem. The telephone company is known to purposefully reject qualified male applicants in favor of only hiring unqualified and disinterested 'minorities'. You personally are paying higher prices for your telephone and other services because of the 'equal rights' laws.