Point At Deer, Call It Horse 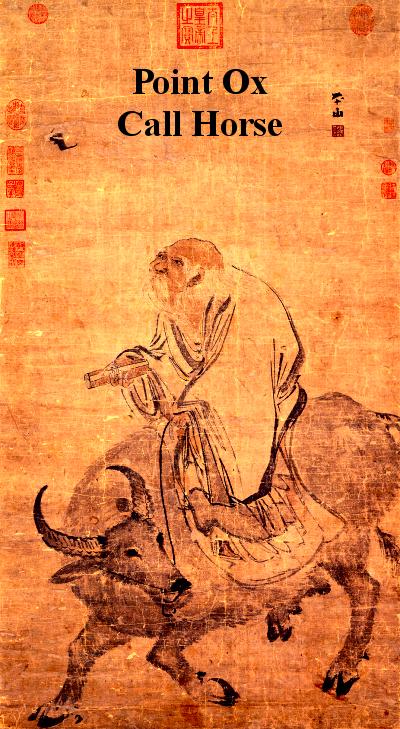 The Chinese idiom 指鹿為馬 'point deer call horse' might be phrased in conversational English as 'pointing at a deer and calling it a horse'. The general idea behind the idiom is that it alludes to a person attempting to attain a personal advantage by purposefully and deceitfully lying through the use of wrong words.

Deceitful behavior has always pervaded all cultures of all eras, but the reported history behind 'Point Deer Call Horse' is interesting because the idiom relates to a specific timeframe of when the written Chinese language sizably shifted of mental patterns and word usage.

When researching for information behind the idiom, and having looked at six different historical sources, the result was of seeing six different accounts, all of which invented conversations and scenarios that could not have possibly been true, and all of which fully disagreed with the other versions' claims except for a few core names. In a manner of speaking, the historians themselves 'pointed at a deer and called it a horse'.

And so, one of the common threads that run throughout all languages is found at the very beginning of researching the idiom: scholar-philosopher historians make stuff up. People have always made stuff up. The game Chinese Whispers is a good example of how the common person is unable to accurately repeat a communication, but scholar-philosopher historians go far beyond the norm by purposefully inventing false histories.

And so, the following historical accounts ought to be taken as implied, that of their being generalized ideas that may have once held a grain of truth, but cannot possibly be fully accurate accounts of what really happened.

Also very plausible is that the stories behind the idiom were invented like how the names of Snow White and Goldilocks have become portions of modern idioms. Just because a king's name may have once been real, it does not mandate that all stories about the king must also be true. A good example is the story of George Washington not being able to tell a lie.

Emperor Qin Shi Huang (who lived circa 259 B.C. to 210 B.C., and reigned from about 221 B.C. to 210 B.C.) is often praised for having conquered and united the seven warring states along with ten or more smaller states. From a humanitarian point of view, the uniting of the states helped to stop wars, save lives, and to enable the people to better live in peace. From a political point of view, Qin's reign might be interpreted as having been economically prosperous, but at the cost of less prosperity for other states that had already been prosperous. From a cultural and intellectual point of view, Qin began the destruction of all state cultures' languages and customs by attempting to mix them into one. From a literary point of view, the Qin dynasty is said to have begun the standardization of Chinese word characters, which has now led to the inevitable necessity of phonetics.

The Qin dynasty, therefore, is a marker for several different shifts of patterns, but most important for the moment is the dynasty's date range being of when Chinese books' mental patterns most notably changed from first-person understanding to third-person imagination.

It is historically reported that during the reign of Qin Shi Huang there had been a period known as The Burning of Books and Burying of Scholars. According to the scholar-philosopher historians, the general sum of conclusion is that some, many, or all Confucian books were burned, and four-hundred or more Confucian scholars were buried alive. The historical claims cannot be accepted as factual for numerous reasons including [1] just because an individual may have an occupation or follow a religion, it does not infer that the individual can never commit crimes punishable by execution, [2] there is no known verifiable evidence that 'Confucian scholars' were killed, and [3] it has been common throughout all known cultures for people to burn books, but except for events like Julius Caesar's burning of the library of Alexandria (which also has numerous different 'historical accounts'), most or all of the burned books during the different periods still exist and were not completely destroyed.

According to some reports, the only books to not be burned by Qin Shi Huang were those related to agriculture, forestry, divination, and medicine. Allegedly, topics of law were to be learned directly from official lawmakers (the lawmakers' own personal and biased slants of whatever laws they wanted to be law). Some histories claim that the book topics to have been banned were history, poetry, and philosophies of the Hundred Schools.

Without the histories being more specific, then on the surface it may appear that some of the banned topics might have been warranted, especially the Hundred Schools' philosophies. However, The Burning of Books and Burying of Scholars illustrates an important event: state-controlled education. If the histories hold some truth, then Qin Shi Huang purposefully altered education to focus on his reported preference for legalism. State-controlled education exists today in all cultures of all nations.


The Burning of Books and Burying of Scholars period of around 210 B.C. is one of the markers of when the Chinese language shifted from being interpreted through [1] firsthand understanding of concepts relative to real-world life, to become [2] memorized phonetics of unknown words as enforced by state-controlled education. It is obvious that Chinese words and sentence patterns began to shift dramatically around the year 200 B.C., and all known books much beyond that period were progressively written with words much like how modern scholar-philosophers apply Greek and English: they define unknown words through use of other unknown words.

The Burning of Books and Burying of Scholars period — in its own way — organized and institutionalized one manner of state-controlled education. During various eras, all known so-called 'developed' cultures throughout the world have established similar state-controlled education. Parallel to the simplifying of Chinese script from the bronze scripts so as to enable the lesser-qualified citizens to participate in the state-controlled education, so have all known forms of institutionalized education become self-perpetuating (inept teachers repeating what they were taught by inept teachers). The result — as is observable in all known modern cultures — is the state-mandated memorization of unknown words in lieu of the cognitive advantages of firsthand understanding.

And so it is to be expected that scholar-philosophers are not able to discern the meaning of an ancient Chinese word if the scholar-philosophers cannot so much as discern the meaning of a modern English word. Nevertheless, state-controlled education of memorized words is merely one of the many variables that combine to cause the use of wrong words, as well as be one of the causes of over 99.95% of people not being able to adequately describe anything (as quantified per the SQ project).

As the story goes, the reign of emperor Qin Shi Huang was followed by the emperor's alleged youngest son Qin Er Shi (who lived circa 229 B.C. to 207 B.C., and reigned from about 210 B.C. to 207 B.C.). Similar to modern struggles for power by competing political parties, reported history has eunuch Zhao Gao as having attained strong political power during Qin Shi Huang's reign. During the reign of Qin Er Shi, Zhao Gao had in some unknown manner presented a deer to Qin Er Shi while Zhao Gao called the deer a horse.

It is much too easy to conjecture of what degree that Qin Shi Huang's state-controlled education might have caused shifts of word meanings alongside of shifts from first-person to third-person knowledge, but conjectures are conjectures, and conjectures possess no firm base of evidence.

Scholar-philosophers had already been improperly redacting and perverting books for hundreds of years before Qin Shi Huang, and the redacting continues to today. There is nothing new under the sun, except, perhaps, man repeating his errors in different eras.

Nevertheless, one thing always stands-out; when people memorize words, the people's minds adapt to believe in the words, as well as the people behaving parallel to the words' patterns. Whether the words are of an ideology, philosophy, or any other, people will begin believing and behaving as the words tell the people to believe and behave. Regardless of the impact that Qin Shi Huang's state-controlled education may have had upon the people, it is certain that the state-controlled education did indeed have a lasting influence on the people.

Legge, Dubs, and all other scholar-philosophers have presented Confucius' quotes as being those of a lunatic's. State-mandated and state-controlled schools perpetuate the scholar-philosophers' Zhao Gao-like hate, lies, cheating, stealing, favoritism, rudeness, callousness, and violence. Reminiscent to Qin Shi Huang, through the threat of violence to any student who refuses to believe in state-mandated lies, students are physically and psychologically forced to accept the lies as true truth. State-controlled 'Zhao Gaos' 'point school, call learning'.

Today, in the streets are seen the protests, riots, hate, violence, and lies. The people were taught in state-mandated schools.

Today, on the Internet, the news, the biggest corporations, television programming, and most everywhere else a person looks, is found the lies, cheating, and violence of tiny people. The people were taught in state-mandated schools.

No known ideology, philosophy, nor any other source of education teaches a parallel '5 Rights', but rather, instead, teach '3 Rs' alongside of commandments punishable if not obeyed, plus 'ear to mouth' word memorization. The people in the streets, news rooms, and corporate offices illustrate the results.

Before a man memorizes words and philosophizes about driving a car fast, he ought to first ensure that he has a car with an engine.

Before a man seeks knowledge, he ought to first ensure that he possesses a mind that is able to think.

The '5 Rights' exhibit a mind that is able to self-think.

Confucius, Xunzi, and Qinren each spoke of a harmonious self-nature that is parallel to the '5 Rights'.

The point deer, call horse idiom would not exist if people were honest.

The people who point deer, call horse do not know the '5 Rights'.

People who do not know the '5 Rights' are of a disharmonious self-nature, which is expressed as the disharmony that destroys all nations, all cultures, all families, and themselves.

Dogs and farm animals run in packs and follow the herd. Only a man who is able to self-think is able to choose his own steps.