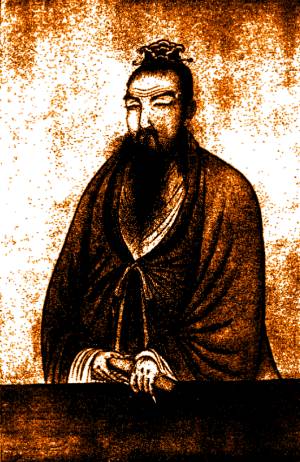 'Confucius' from the book "The Ethics of Confucius - The Sayings of the Master and His Disciples Upon the Conduct of "The Superior Man"". A drawing by Kiechu Yamada, based upon an ancient copy of the traditional portrait of Confucius. Reproduced by the courtesy of Dr. Paul Carus. G.P. Putman's Sons, New York and London, © 1915 by Miles Menander Dawson.

(Yamada's drawing appears to be more realistic than the popular paintings and statues seen online. The book is over 100 years old and believed to be in the public domain. Photograph cropping, sizing, and enhancements by Larry Neal Gowdy.)

It is surprising to discover that search engines do not list any Confucian websites in English (or at least not in the top one-hundred results). There are several web pages on university websites that speak about the history of Confucianism, plus a few more websites that generally repeat what the universities have already written, but the search engines do not show any website that is devoted to Confucianism.

This Confucian web page was created for people who are looking for a website about Confucianism. This site's pages are also related to ancient Chinese texts, and of how the Confucian texts are still relevant today.

Researchers may study many hundreds of books on major religions and western philosophies, and the researchers may assume that since Confucianism is a major philosophy, then surely there must be many English-speaking people who also follow Confucianism. The assumption would not be correct.

An individual can spend several days searching book retailers, libraries, and online for books related to Confucianism, but the books found will be written from a third-party point of view, a scholastic point of view that merely recites the histories and translations of what older books have already written.

Why Confucianism is not Popular in English

The only exposure to Confucianism by most English-speaking individuals will likely be from James Legge's translations of the Chinese classics, and also likely to only be a brief quote or two from The Analects. The translated sentences are most commonly irrational and contradictory, which is sufficient reason for people to ignore the words and to read no more. Many English-speaking people acquire an opinion that Confucianism is primitive nonsense that was invented by people with troubled minds.

When translating the original Confucian texts one's self, the written concepts are rational, coherent, connected, and often more advanced than modern philosophies.

Also, modern cultures tend to have no interest in self-betterment, nor an interest in much of anything beyond materialism. For about twenty years there have been many writings about Nature's way, which have been published in books and online articles, but almost no one was interested in the topic. The online articles were ranked very well on search engines (top ten to the #1 ranks nationally), but still there was almost no interest at all from the public.


It appears that the public believes in the things that they have been told in schools to believe, but the people do not accept the knowledge to become a part of their lives, and that helps to explain why Confucianism is not popular in English-speaking cultures. Confucianism often speaks of how an individual is bettered through good behaviors, but the public has no interest in being better; the public only has an interest in materialism and favoritism.

And so, unless Confucianism were to become government-enforced law — as had often been done in Asia — then Confucianism cannot have many followers in a modern English-speaking culture. Nevertheless, it is useful to remember that the public also has little or no interest in other ideologies either, including science and religions. Most people claim that they believe in their ideologies, but almost no one lives the ideologies' ideas. Confucianism itself is not a failure; the failure is the people themselves.

It is not physically possible to accurately translate an ancient foreign language of an ancient foreign culture into modern English: it simply cannot be done. The best that can be hoped for is to glean the general concepts of what a sentence might be pointing to, and to then form the English words into a structure that is coherent and in harmony with the text's surrounding sentences.

If it were possible to accurately translate the ancient Confucian texts into English, then at least two of the hundreds and thousands of translations would agree with each other. No two translations are alike, which proves that a fully accurate translation is not possible, and an individual ought not expect otherwise.

The best and most useful option is for people themselves to translate the original Chinese texts. Translating ancient Chinese into modern English is difficult, very difficult, but it is the best way, and perhaps the only way to have a meaningful translation.

This website will be quoting a few portions of various Chinese texts, but the site will not give full translations because the translations were a lot of work, and it is not chi dao to give to the public what the public does not want.

At present, there are no known good sources for translating ancient Chinese into English. The known dictionaries are very sparse of meaning, and the online translators often give completely wrong translations. There does not exist a really good Greek-English dictionary, nor does there exist a definitive English dictionary, and, so, it is expected that less-so is there likely to be found a good Chinese-English dictionary.

One's own translations, therefore, will be difficult and very time-consuming, but hopefully very rewarding.

What Confucianism Is and Is Not

As Confucianism is portrayed to the modern world, Confucianism is as a compromise between high ideals and low expectations, and formed within a design that can be politically applied to help a culture to attain stability (which was very important during the pre-China warring states era).

Also from Zhong Yong is a Chi Dao draft translation "Happy anger, sorrow joy, it have-not expressed, call it center." Most translations tend to present wording similar to: "When joy, anger, sorrow, and happiness do not rise, this is called the Mean."

When two contrasting words are phrased as contrasts, the contrasts themselves change the meaning of the sentence. There are many similar contrasts throughout the known Confucian texts, but all known public English translations have ignored the contrasts, which has caused the translations to say things that were not said in the original texts.

To a person of good qualities, but who does not yet have centeredness, Confucianism is as a good source of things to think about and to possibly emulate into one's own life.

To the average person, Confucianism is a set of rules that the majority of citizens can obey and make use of to form a culture that has uniformity and stability.

Of the known public translations, most were presented from a tiny point of view.

A wise thing to be aware of is that learning too much about a topic can often result in finding the topic's flaws, which can then sometimes sour a person's enjoyment of the topic. Confucianism has many pearls that are worth the effort to discover, but Confucianism also has roots within an era of warring states, and so there will be Confucian ideas that may have been productive 2,600 years ago, but are not productive today. The Chi Dao interpretations presented on this website are given as a means of presenting pearls without dirtying the pearls with other topics that are not useful for an individual to learn of.

The Requirement of Self-Effort

As all honorable ideals point to, the only path to an honorable thing is through self-effort. Each individual must participate in their own lives; memorizing another man's words is not self-participation.

People as a whole never have and never will participate in their own lives, but that is why Confucianism exists, and why this little Confucian web page was created, so that the few individuals who are interested in participating in their lives, might find encouragement and a first step.